Getting It On With Dwarfs at Minetta Lane 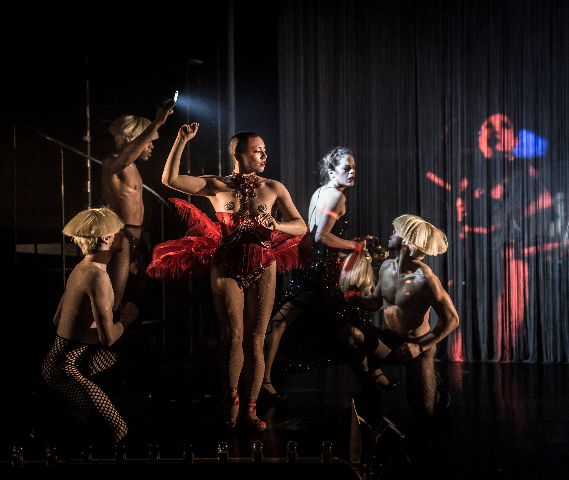 Hilly Bodin as Snow White (center), Laura Careless as The Queen (second from right) and the cast of Company XIV’s Photos by Mark Shelby Perry 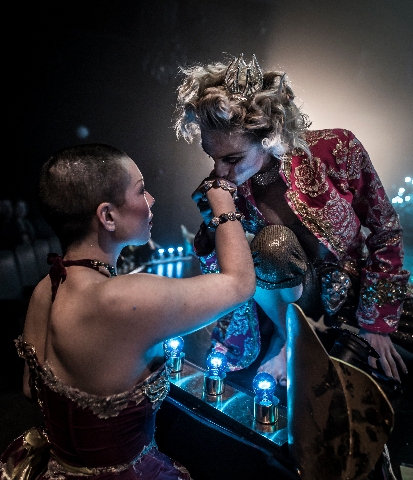 Hilly Bodin as Snow White and Courtney Giannone as The Prince 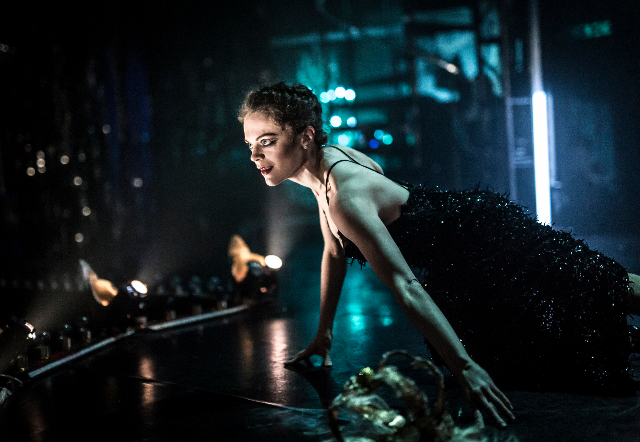 Laura Careless as The Queen 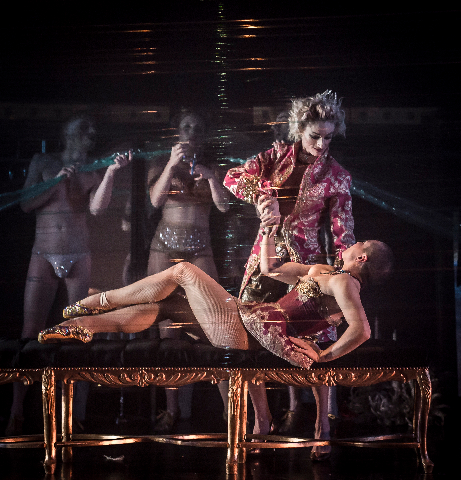 : Hilly Bodin as Snow White (seated) and Courtney Giannone as The Prince (standing) 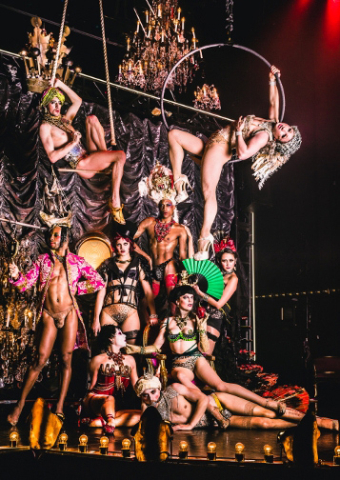 I must admit that the ad campaign for Company XIV’s production of Snow White at New York City’s venerable Minetta Lane Theater inspired by the Brothers Grimm’s fairy tale that we all grew up knowing – it is being sold as an adult version of the folk tale – more than captured my attention.

Like Whitney Houston’s singing, “I Will Always Love You,” and Celine Dion’s “My Heart Will Go On,” both of which kidnapped me on first hearing, Snow White’s seductively promising  imagery wrapped  itself around my gonads and reeled me right in.

Since I’m an unadulterated hedonist – what else is there besides reading, writing, and arithmetic? — the very thought of seeing a no-holds-barred production, conceived, directed, and choreographed  by triple-threat Bad Boy Austin McCormick, with half-naked men and woman showing their wares, acting, dancing, and otherwise (one shouldn’t have to wait till summer at the beach to see what people are sporting all year round) appealed to my most prurient side.

For those not in the know, McCormick’s Nutcracker Rouge was nominated for a Drama Desk Award in the category of unique theatrical experience in 2014 and for best choreography for Rococo Rouge in 2015.Both had successful runs at the Minetta.

Surprise of all surprises, aside from a few perky boobs with pasties, a number of shapely buns, six packs, G Strings supporting hanging fruit, and strains of the late 1920s Weimer cabaret scene, complete with sensually smelling incense that filled the theatre, the waves of eroticism that peopled the stage was a lot more audiovisual than visceral.

Of course, for those minds that are capable of mounting a runaway horse, Snow White’s use of mood inducing music from classical to rap to pop, Jeanette Oi-Suk Hew’s lighting that bathed the actors in amatory hues of red, Zane Pihlstrom’s eye-popping costumes, both ornately designed and near-nude peekaboo, with a concentrated effort, a kind of ecstasy, albeit short of climaxing, can be achieved. I say a concentrated effort for McCormick has thrown everything, as well as the kitchen sink, onto the stage. Some judicious editing, especially in the first act which drags on, would do us all well.

Most annoying is the play’s continual in and out use of a rolling Punch and Judy booth, the type seen at carnivals, to further along the story. Equally weak, although it must have seemed visually exciting to the director at the time, is the use of two fan-like, hand-held signs on which images of the seven dwarfs, barely seen by the audience, are drawn.

Yes, you heard it here. There are no dwarfs (aka, in p.c. lingo, as “Little People”), in this extravaganza, or for that matter, no human’s posing as dwarfs. The only males in Snow White--maybe four or five dancers—are all there to service the Evil Queen (Laura Careless). Even Prince Charming (Courtney Ginannone), whose kiss frees Snow White (Hilly Bodin) from the queen’s curse, adding a nice gender-bending touch, is played by woman.

When not onstage Ginannone, also a classical pianist, hits the 88’s with music by Debussy and Prokofiev. It is her amazingly deft Cyr wheel performance in the second half of the play that elicits the first rounds of unrestrained applause.

When all of accessorized values—the lighting, music, costumes, props, flashing video images of the actor/dancers on a diaphanous curtain, and the choreography, both solo and ensemble, modern, jazz, and ballet—meld into one, the true genius of McCormick, as well as the exquisite athleticism of the finely tuned dancers, is ushered into view.

In one particularly stunning number each cast member takes to the stage with long-dressed headless mannequins as their dance partner. Also added to the mix is opera-trained Mary Richardson who sings songs by Franz Schubert, Handel and Britney Spears.

Though everybody plays an important part in this soufflé, it is Hilly Bodin’s Snow White and Laura Careless’s Evil Queen, the two flashiest jewels in the setting that get to do most of the shimmering.

It is wonderful to watch the actresses have a go at each other. But when all is said and done, it is Careless whose extraordinary acting chops steal our hearts. Just watching her fall apart at the end of play—with Maria Callas-like screaming, head-twisting, tossing of hair, and facial contortions, when she sees that Snow White, with a Prince in hand no less, is not dead, as she had planned—is worth the price of admission. By her humanizing the queen, we are almost made to feel sorry for her. It is a harrowing experience, the type that usually garners both notice and awards. I see great things in Careless’s future.

You can view the Snow White promo video trailer at