Theatre for a New Audience's Merchant of Venice 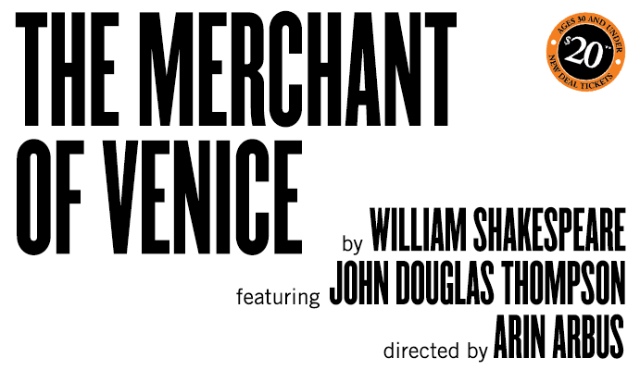 The Merchant of Venice at Theatre for a New Audience Brooklyn, New York 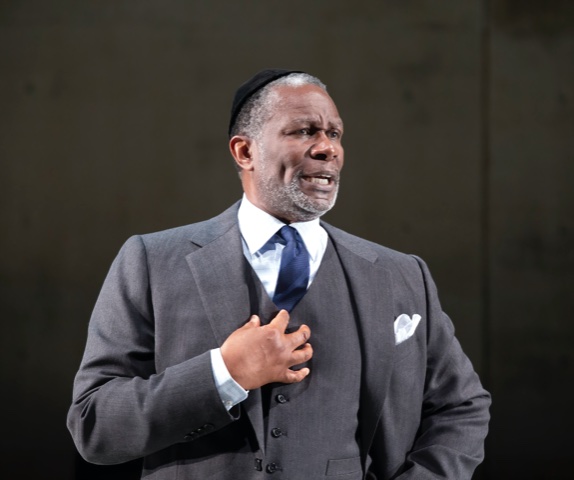 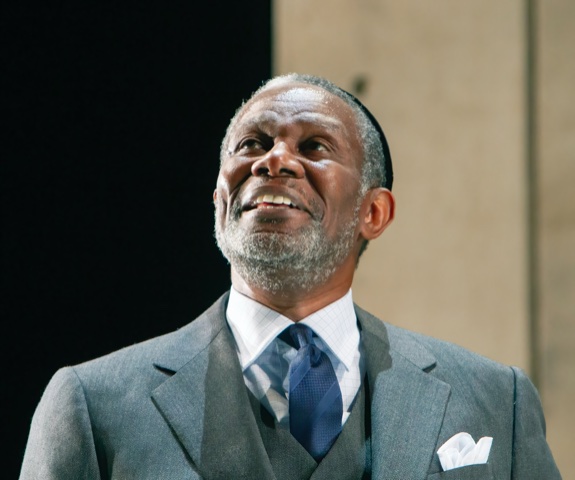 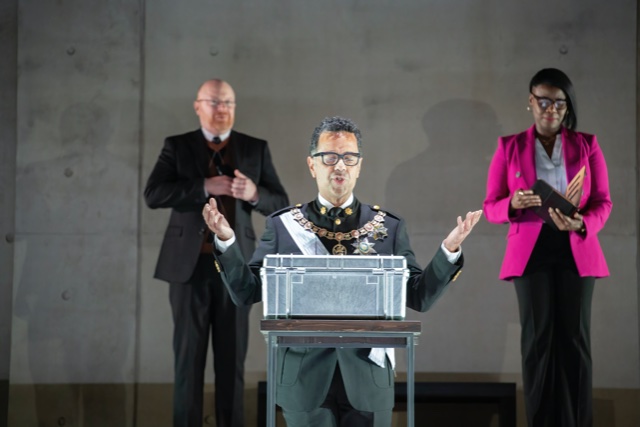 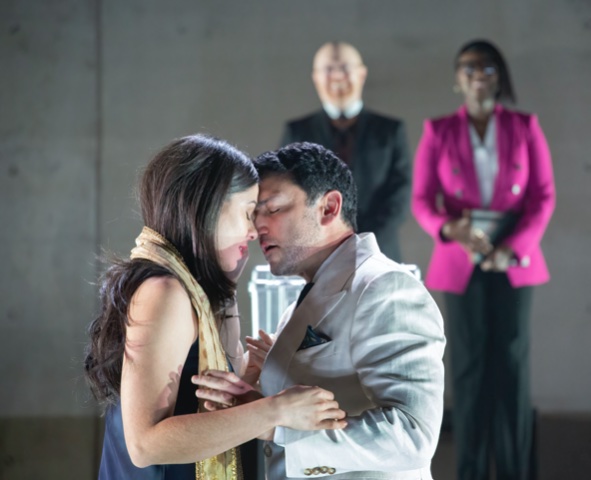 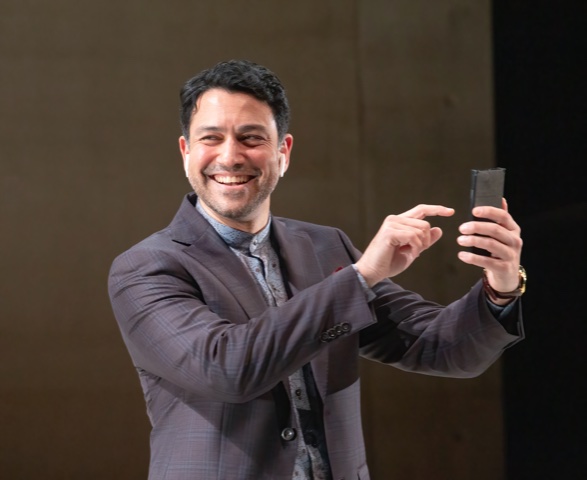 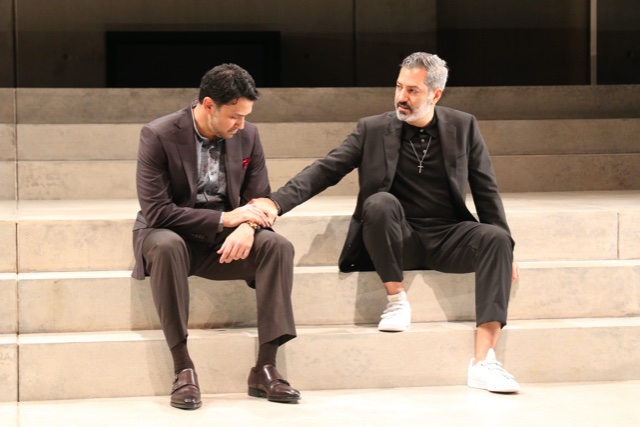 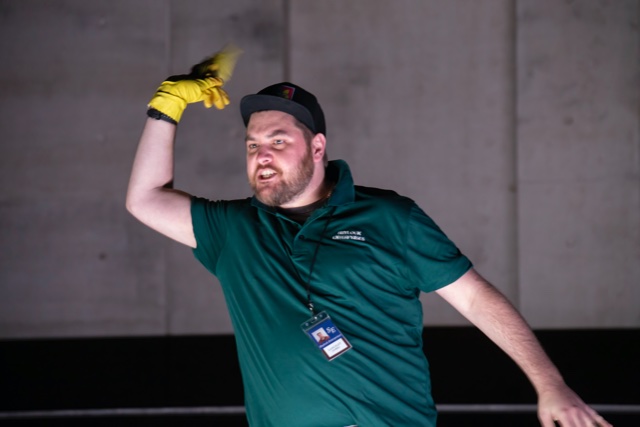 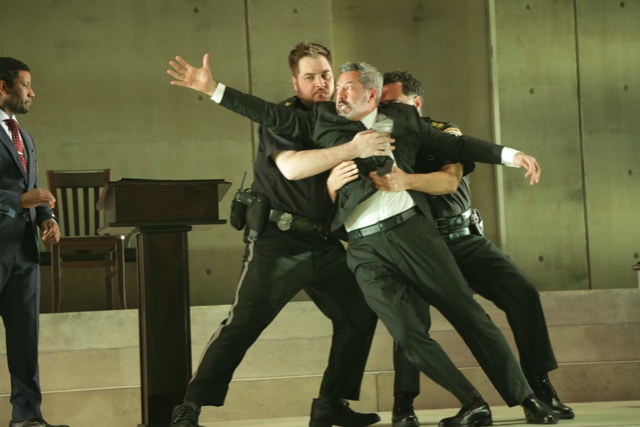 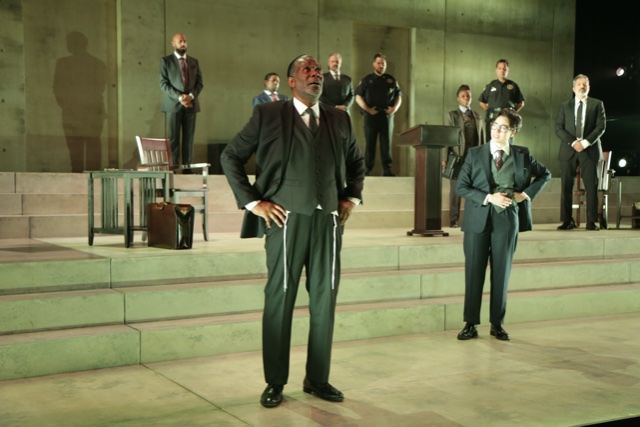 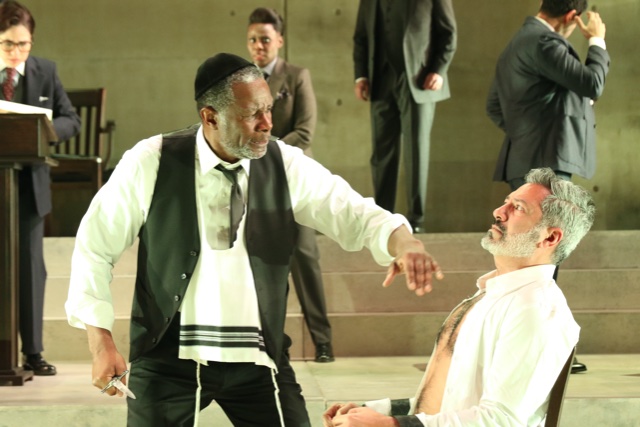 Shakespeare invites the elevation of Shylock to centrality in Merchant of Venice. Many characters in his play have equal time. Now Theater for a New Audience (TFANA) makes the case for the play as Shylock’s. John Douglas Thompson assumes the Shylock role as the ultimate outsider. He is an irresistible actor who quickly overcomes resistance any prior knowledge of the play calls forth.

Over a year ago, TFANA streamed a rehearsal of the play. Thompson spoke about the roles that Black actors can assume. He pointed out that since Blacks are outsiders, they well understand the perspective of spectator, looking in at the dominant world around them. Shylock is reviled by his fellow countrymen, spat upon and called a dog. His fury is palpably seething as we meet him.

Thompson stands tall. He wears the most elegant dark suit. Tzitzit tassels descend from his jacket. A black skull cap is nestled in his dark black hair. He is unquestionably a Jew.

From the moment he transacts one of the most famous loans in history, he carries himself like a successful businessman. A thrifty man, he has accumulated money to lend to fellow Venetian citizens.

Merchant of Venice was written when Jews were banned from England. Unattractive 'Jewish' traits are magnified as 'usury,' money lending at unusually high rates of interest. When F. Murray Abraham played the role at TFANA 2007, people left the theatre mumbling loudly "anti-Semitic.'

Thompson does not leave this taste. He says 'thrift’ softly. As Thompson speaks, you feel Shylock's pain. His daughter has left home to marry a Christian. She has taken a treasured ring of Shylock's and sold it for a monkey. For Shylock, a wilderness of monkeys is not worth this ring. Is this greed or finely calibrated emotion?

In Thompson, Shylock becomes a sympathetic and human figure. Hardly perfect, but understandable. Director Arin Arbus points out that no one in the cast is attractive. Yet we recognize in all of them a human mix of good and bad. We can identify.

As the play opens, Thompson carries the burden of discrimination without wincing. The arc of the play travels through a passionate complaint that he is a Jew, but he is also a man.

Thompson is an actor who works with all ranges of his voice. Not a limb of his body is unengaged. His entire body crumples into collapse as he loses his daughter and a ring his wife had given him.

He perks up when he learns that the borrower Antonio’s boats have not reached their destination. He is at last able to exact his due. Not money. So much for the issue of greed. No, Shylock wants revenge. For his contract provides him with a pound of flesh if Antonio defaults on the loan. The flesh can come from the heart. Shylock will have his payment, although Portia, as Balthazar the lawyer, suggests he deal with “the quality of mercy.”

In the play, Shylock is crushed in the end because he will not accept money instead of flesh. He is stripped of property and also his religion. He has lost his daughter. He has nothing.

How this production handles his demise is one of those aha moments, no spoiler here. The new production suggests that mercy can be updated to ‘atonement.’

The actor who rivals Thompson’s complete performance is Haynes Thigpen as Graziano. His is a different range, lighter and even funny.  His reward is Portia’s maid, the smart and elegant Shirine Babb. Portia and Bassanio, the masters, and their aides work well together at a quartet. They loft moments of humor that abound in a dark work.

Director Arbus has succeeded in presenting a play full of irony to make an important point about our treatment of outsiders. Cruel verbal assaults, kicking and spitting, do not bring our different neighbors into the fold. Their alienation may not only be unjust but dangerous.

The production at the Polonsky Shakespeare Center is stripped down, yet magnificent. A central grand wall has two doors. It sits atop steps where much of the work plays out. Only Shylock enters through the audience, as if to take us to his point of view, to look with him at the white men on the stage.

Careful attention to detail finds lower class people wearing sneakers and higher up members of society in leather shoes. Portia is an athlete, a runner and boxer. This makes her all the more desirable to her suitors, a tangible add-on to wealth. Each character is distinctive and all too human.

We are focused on Shylock’s vengeance at the end. Scholar Patrick Lynch has astutely observed about vengeance in Shakespeare, “In the wonderfully bewildering range of human emotions and behaviors, there may be nothing more absurd and futile than the passion of vengeance. Avengers feel justified in their cause. Seeking this end has the capacity to destroy everything in its path.”

John Douglas Thompson as Shylock considers this outcome and makes surprising decisions.  Go to the Polonsky Shakespeare Center to witness his journey, his arresting performance, and an incomparably moving production. Tickets here.