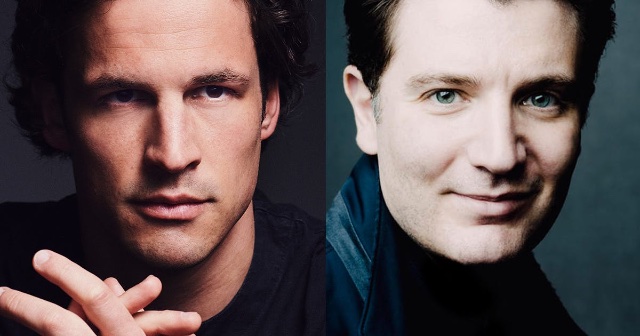 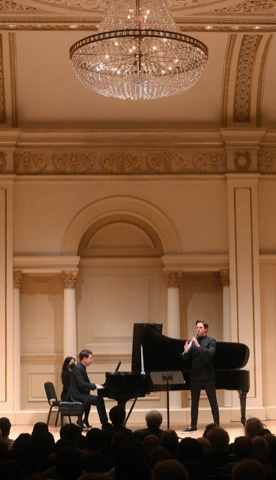 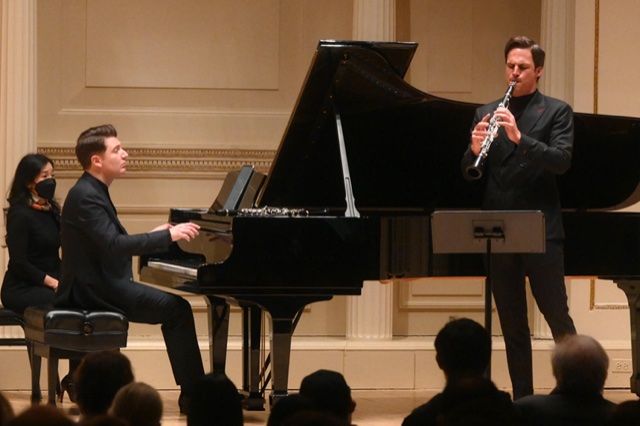 Making magical music together at Carnegie Bax and Ottensamer speak to each other, like chamber musicians. 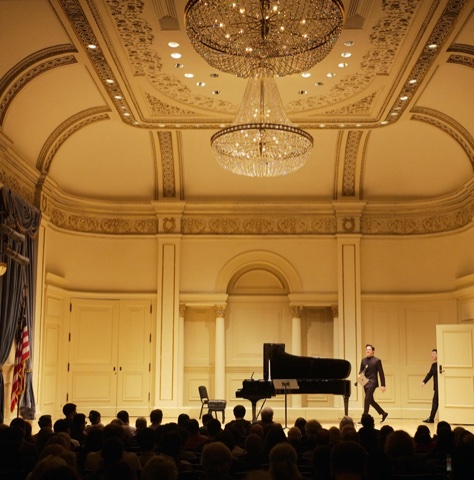 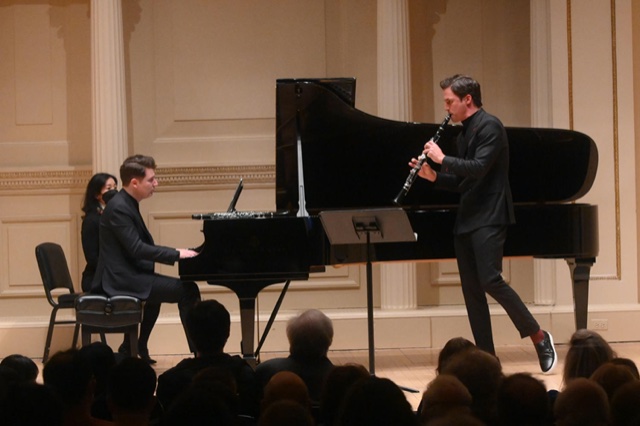 Bax and Ottensamer both dance as they perform. 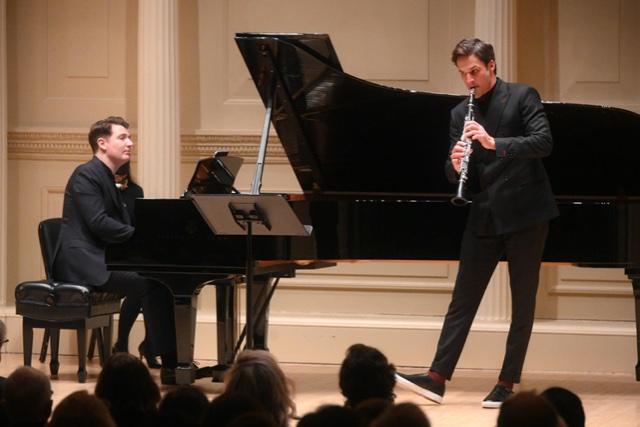 Ottensamer in white dimmed black sneakers taps the beat. For Betthoven he wears all white sneakers in the Berin Phlharmonie.

Alessio Bax and Andrea Ottensamer, two consummate artists, performed together and individually in Weill Hall at Carnegie Hall.  They both seek to help us hear the origins of music as a communicative and an expressive medium.  Yet there is nothing ponderous about their approaches.

Two handsome men on display beyond sparkling chandeliers inevitably lead to the mating call as music’s start.  Certainly the many hopeful young women in the audience responded. Both aritsts deliver in kind because they sing, quietly and also with wild abandon. They are the Katzenjammer kids (from this you will get the correct pronunciation of the clarinest’s name), mischievous and deeply serious at the same time. Ottensamer plays on a Viennese clarinet whose unusually dark and warm tone he likes. It is easy to see why.

Some registers on the clarinet which are very much like the human voice.  Ottensamer explores these, at the beginning of the program in his arrangement of six of Felix Mendelssohn’s Songs without Words.

Mendelssohn may define the romantic period, but it is specifically his unbridled sense of melody that Ottersamer addresses. Spring Song forinstance gives us wide ranges of pitch in the melody. Key change is first heard at eighteen seconds. Key changes create a love story, perhaps the story of a couple walking up and down the hills. We hear ascent and descent in the changes in melody. The mood emits the sense of happiness and contentment. Beauty allows us to escape reality and feel a joyful world.

Once asked what musical work he would take to a desert island, Otterman replied, “The beauty of music – and it’s the same with food – is which one would you want to live with for the rest of your life? I would probably not take any – or just take bread and butter in the case of food. The diversity of music is the beauty of it, especially with the clarinet where we’re so blessed with having a varied repertoire. But a piece that has had a huge impact on me and has always been on my mind and in my heart is the Brahms Clarinet Quintet.”

This evening we heard a Brhams work composed at the same time as the Quintet. Brahms had been about to retire when he heard  “the nightingale of the orchestra,” a clarinetist, perform.  He was so entranced that he went back to the drawing board again. The classic Brahsm lyricism, richness and poignancy is abundant.

Both artists explored disability and music. Bax performed Scriabin’s prelude for left hand, written when the composer had injured him right hand competing with Rachmaninoff, whose hands were much larger than his.

Ottendamer performed the humorous and delightful Pocket Sized Sonata 2 by the blind composer Alex Tenpleton. The full yet light heart of both instrumentalists and composers was exposed with charm, Bax accompanying which his unusually light touch. Templeton felt, and the artists obviously agree that good music doesn’t have to be heavy-handed.

Bax solo performed a Chopin Ballade with the same verve and persuasion that pervaded the evening.

If you closed your eyes at toward the end of the concert, you might have imagined a trumpet wailing.  As the clarinet was invented and used in performance especially playing in this range, many concert goers were confused and thought it was the clarino, or natural trumpet. Gershwin of course used the trumpet itself.

Ottensmer has a burgeoning conducting career and it will be fascinating to see how he brings his sense of song to conducting.  Great conductors like James Levine, Kirill Petrenko and Barbara Hannigan have been incubated in song literature and singing.  Ottensamer has prepared for this with his clarinet.

Carnegie Hall has again brought us a cutting edge concert filled with both comfort and surprises.

Berkshire Fine Arts (BFA): Can you describe the kind of encouragement, direction and support you got from your parents as you began to study piano, then cello and finally got into the family business, ‘the clarinet.”

Andreas Ottensamer (AS): It was very natural, we were always surrounded by music and therefore it was "logical“ that as a kid I got curious and wanted to try. There was always something playful and cheerful about making music at home.

BFA: As you begin to conduct, do you find yourself performing differently?  As a soloist, as a chamber player, and as an orchestra member?

AS: f course, it all is connected and has an impact. You learn from each field and take something from it for the others. That’s what I live about being musically active in various ways. It even goes beyond that - I believe that every experience in life adds to my music making and makes me see and feel things differently.

BFA:Most conductors began playing the piano. Do you use the piano to study scores you will conduct?  James Levine is said to have conducted lyrically because he listened to song so much. (Kirill) Petrenko spent years at the Bayerische State Opera. Barbara Hannigan is of course a singer/conductor?  Does performing on the clarinet give you an advantage, because it is an instrument closely related to voice production?

AS: Yes the piano is indeed a very important "base“ to have. I’m lucky to have experience with the piano, string instruments (cello) and obviously wind instruments. I believe that is very helpful.

BFA: Would you be satisfied only conducting? (and giving up concertizing and the (Berlin)  Philharmonic?

AS: Let’s see where my path takes me!

BFA: Do you find the current trend of ‘making it up” to women and people of color a threat to your career as a conductor?

AS: Not at all. If anything, I find it important for women themselves - to take that as an example - that their development and career path is neither unnaturally hindered nor pushed. I think our society still has to learn a lot when it comes to equality or balance.