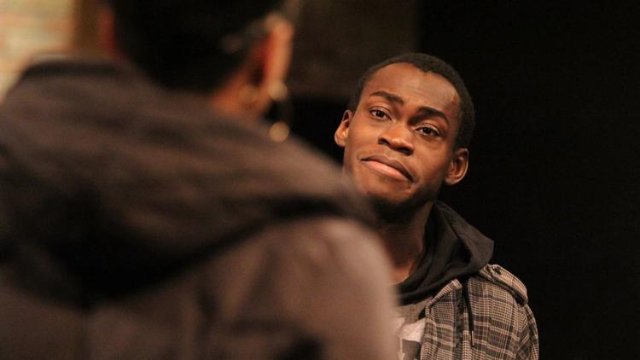 The Red Rex Theatre Co. rehearses a play about characters drawn from their own Rightlynd neighborhood in Ike Holter’s play at Steep Theatre. They hope this will be the play that will make their mark on the city, but that’s not to be. Because the story belongs to someone else.

Red Rex, beautifully directed by Jonathan Berry, poses the contentious question of who gets to tell the story. It’s a play about a storefront theater staged by one of ’s foremost storefront theaters in a space that used to be a grocery store. The perfection of that situation is overturned when one of the subjects of the story confronts the Red Rex cast with this:

“You took my story. You take my block. You take the colors and the shapes and the style …. You take my life and you put it up here block it in lights so it’s all spelled out you take her story and you roll around in it….”

It seems the play’s writer and director wrote the script after hearing pieces of the story in a neighborhood bar. That’s the talented and energetic Lana (Amanda Powell), who spars with Greg (Chris Chmelik), Red Rex’s business-minded executive director (whose job includes sweeping up after a party) over matters creative and practical. Three years ago, Red Rex Theatre Co. moved into the empty building formerly used by locals as a squat and party house, in the gentrifying Rightlynd neighborhood in ’s 51st ward (vividly described in Holter’s play, Rightlynd).

Trevor (Debo Balogun), the surviving member of the family whose story is told in Lana’s play, is both angry and curious about what’s going on in the building as the Red Rex cast gets ready for opening. He finally poses the ultimate theater question:

“I’ve seen y’all, right, I’ve seen y’all come in and out of here, all hours, didn’t know what you were doing first at first I was like ‘damn these guys are here 15 16 hours a days damn these guys must be rollin in it’ but the closer I look at y’all you got holes in your pants bad teeth smelling weird looking stupid I am basically on welfare but I STILL have more money than half of those motherfuckers in there; Who the fuck are you people?! Why do you do this?”

Red Rex follows the theater company’s rehearsal and production process as well as their relationships with their neighborhood and its issues. Director Berry’s entire cast is stirring and believable. Jessica Dean Turner opens the play (the actual Steep play) with an emotion-laden monologue. Joel Reitsma, a Steep regular, does his usual excellent job as Adam, the love interest in the Red Rex play. (You may remember him in Birdland or The Invisible Hand.) Aurora Adachi-Winter is delightfully wired as Tori, an obsessive stage manager (who confesses that she would have liked to be a florist). And Nate Faust as Max (a Jeff-award-winning scenic designer) is a colorful, rough-edged artiste. He hates projections but ends up loading the entire scenic design on a flash drive. (Oops, spoiler.) Balogun’s performance as Trevor is powerful and hyper-real. The characters played by Powell and Chmelik ground the play in the reality of storefront theater.

Scenic design in the real play is by Joe Schermoly, with lighting by Pete Dully. Sound design is by Sarah D. Espinoza and costumes by Stefani Azores-Gococo.

Red Rex is the sixth play in Holter’s seven-part Rightlynd Saga, which begins with Rightlynd, the origin story, in which we learn the history and lore of the gentrifying neighborhood and its new alderman, Nina Espinoza. Exit Strategy, Sender and Prowess have been produced in recent years by theaters, as was The Wolf at the End of the Block in 2017 by Teatro Vista. The seventh play chronologically is Lottery Day, set in fall 2019, due for a Goodman Theatre world premiere this year