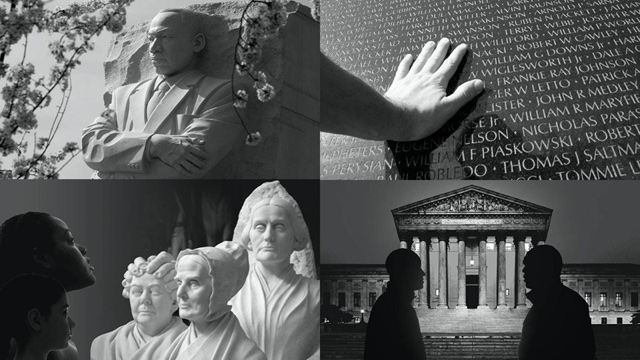 Written in Stone World Premiere in Washington in March 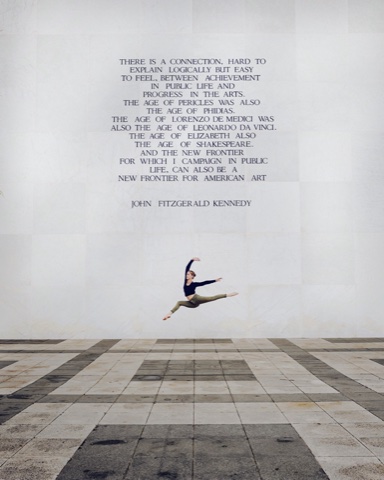 John Kennedy on the arts on the walls of the art center named after him. 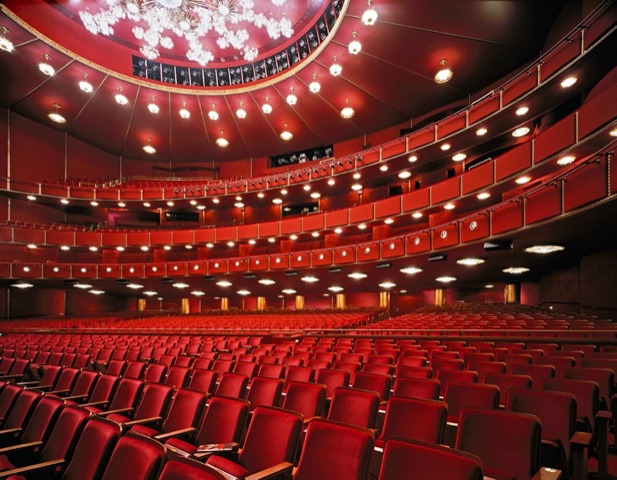 The opera house in the Kennedy Center. Sadly Ruth Bader Ginsberg's black iced glove will not be seen gliding down a rail. Her good friend Anthony Scaloia will also be missing. You can attend in their place!

The Works & Process program at the Guggenheim Museum presented a preview of Written in Stone, a four-part opera celebrating the 50th anniversary of the Kennedy Center in Washington.  Washington Opera Artistic Director Franceca Zambella read a quote from John Kennedy carved into the center’s walls (pictured above).

Zambella has gathered together four A list composers and librettists to offer operatic commentary on the meaning of monuments. Jason and Alishia Hall Moran offer a definition of monument in "Monumentalism."

A. M. Homes and Kamala Sankaram find a suffragette statue hidden in a closet for 70 years in "Rise."

Bringing to life the often forgotten 1921 Portrait Monument featuring Lucretia Mott, Elizabeth Cady Stanton, and Susan B. Anthony, with one face left uncarved, Sankaram and Homes give a voice to those whose stories have been left out of history.

David Henry Hwang  and Huang Rao, the dynamic duo that has brought us "American Soldier" and "M. Butterfly", now look at the Vietnam Memorial. The controversial origin of the Vietnam Veterans Memorial is at the heart of this story featuring interconnected yet conflicting characters: Maya Lin, the Chinese American student architect of the memorial’s design; a Vietnam War veteran; a Vietnamese refugee; and a government official.

"It All Falls Down" by Marc Barnuthi Joseph, Kennedy Center Vice President and Artistic Director of Social Impact, poet, playwright, and educator and Carlos Simon, Kennedy Center Composer-in-Residence and 2021 Sphinx Medal of Excellence recipient, is a story of love and reconciliation, as a father and son meet on opposite sides of a rally about same-sex marriage outside of the Supreme Court.

Home and Snakaram talked about wanting to have a strong female figure in their work, but having to reject Nancy Pelosi because this was to be a non-politial piece. Daryl Freedman gave voice to the powerful woman, singing with Vanessa Becerra. They discover the statue of women who history left behind for so long.

Singers at the preview were extraordinary.  They have largely been developed by the WNO Cafrtiz Young Artists of Washington Young Artists Program.

David Henry Wang and Huang Rao are comfortable and frequent teammates. Neither could remember who suggested the Vietnam War Memorial as their subject.  Wang had met the sculptor Maya Lin when they were both in their early twenties.  Part of Lin’s problems with the sculpture had to do with her Asian background and youth. The War of course was highly controversial, driving President Lyndon Johnson from re-upping his Presidency for a second term and causing riots all over the country.  Some of the sounds of the War which ring in the Johnson Library in Austin enter the opera.

Baritone Hunter Enough sang a tortured aria by Robert McNamara, who supported the war in Johnson’s term and backed away from its justification as time went on. Karen Vuong sang an aria by Maya Lin “Chinese as Apple Pie,” reminding us that we are a nation of immigrants.

Rao spoke about giving his children fireworks on the forth of July and censoring the comment that fireworks were invented by the Chinese. He feared that his children would repeat this remark and be marginalized in school.

As artistic director Francesca Zambella talked with the creators, it was clear that these teams would bring not only superb composition and literary talents to their work, but offer scores that deeply reflect the stories they are telling.

Written in Stone is offered at the Kennedy Center from March 5 to March 25.  Tickets here.