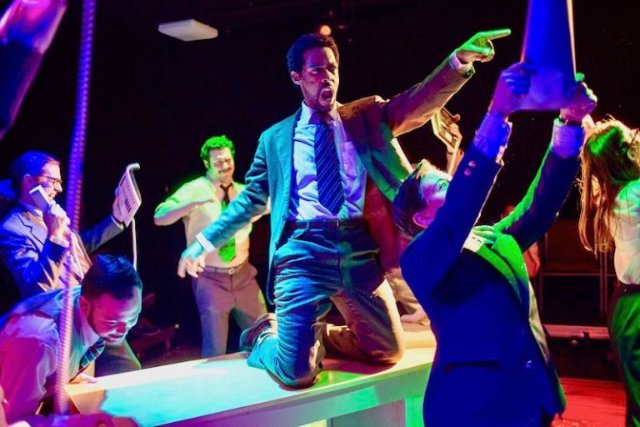 If I told you I saw a play about the Latin American debt crisis and it was fabulously entertaining, would you think I was crazy? Well I did and you shouldn’t.

In Latin America, it was La Década Perdida, the lost decade starting in 1975 when governments, buoyed by soaring oil prices, borrowed enormous sums from the World Bank and commercial banks to finance industrialization and infrastructure projects. When interest rates soared and prices dropped, this mountain of debt caused governments such as Brazil, Argentina and Mexico to go into default. (And despite what one banker says, countries do go bankrupt.) The banks’ strategies, based on sovereign debt as a safe bet, also tanked.

Broken Nose Theatre tells this story on a personal level in the U.S. premiere of Labyrinth by Beth Steel, cleverly directed by Spenser Davis, with so-essential choreography and movement direction by Davis and Ben F. Locke. Davis and Locke make the chaos of a trading room floor work like a modern ballet and swiftly move this fast-talking play from interview basics to bankruptcy in two acts.

It’s New York in 1978 and our ambitious banker, a credit analyst named John (William Anthony Sebastian Rose II) happily wins promotion to banker, working in the Latin American group. Howard, the senior exec who interviews him (Robert Koon) tells him that the bank’s job track can be “blisteringly fast.” And under his new boss, Charlie (David Weiss), John learns that for himself as he is whisked off to Brazil, Mexico and other countries to meet with ministers and important business executives about making loans to the government to fund big projects. (And also to fly first class, stay in luxury hotels and drink champagne and vintage Scotch.)

Relevant bit of dialog in Rio de Janeiro:
John [Friendly company’s] bid for the (power plant) construction contract is 30 percent higher…. So they’re not going to award him the contract.
Charlie Because his bid’s 30 percent higher? It’s practically a done deal.
John But that’s…?
Charlie Connections. That’s connections. And what Latin America’s all about.
John But that’s… a waste… of government money.
Charlie That’s not our concern…. Our concern is securing the loan. Period.

And so it goes. The job track does turn out to be fast. John, despite not being Ivy League, learns how to fit in, including how to dress) and soon he’s an assistant VP and then a VP. On the way up, his late father Frank (Darren Jones), who spent time in prison for fraud, appears to John at home and later in a hotel room. They talk, share a drink and discuss old times; Frank tries to get his son to view his skyrocketing career with a rational eye.

John also occasionally meets a business journalist (later an ex-journalist) named Grace. They chat, flirt, meet for dinner. It’s meet-cute and date-cute and it leads John to say a bit too much about his company’s activities in Latin America.

Banker colleagues Rick (Adam Soule) and Philip (Benjamin Brownson) provide color commentary on the business and its luxury benefits. As the play ends, they discuss the traffic and the heat in Athens. Next stop.

Theresa Ritchie’s scenic design complements the choreography of Labyrinth. There’s little furniture. A desk becomes a dining table, a bench and everything is on wheels. Most inventively, an array of lighting fixtures is fixed above the stage and various office fixtures, chandeliers and tulip hanging lamps are lowered to define each space. Lighting design is by Seth Torres with sound by Tony Ingram and costumes by Rachel Sypniewski.

I highly recommend this fast-moving, smart and funny play by U.K. playwright Beth Steel. If you’re not familiar with the early 1980s global economic recession and the Latin American debt crisis, you might want to read up on it before seeing the play. No need to get out your old Econ101 textbook. Just find a Wikipedia page or read this essay on the Federal Reserve Bank’s history site or this article.

Labyrinth by Broken Nose Theatre continues at the Den Theatre, 1331 N. Milwaukee Ave., through February 29. Tickets are $1-$45 or pay-what-you-can. Performances are Thursday-Sunday. Running time is 2 hours, 20 minutes, including one intermission.