Improvising on a Peasant Recipe 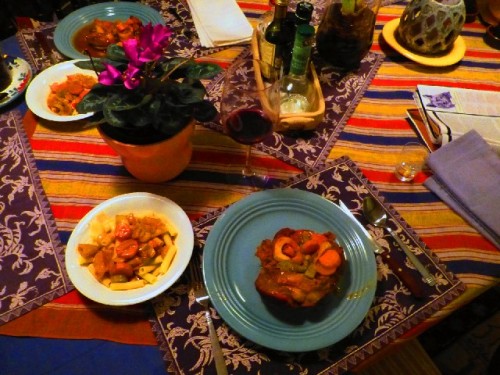 A very special winter meal of Osso Bucco with the sauce over penne. 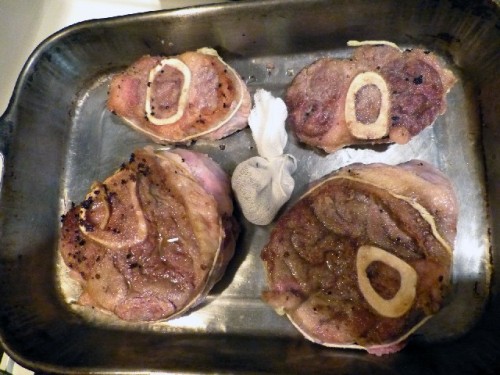 The browned meat in a large baking pan rather than a Dutch Oven. 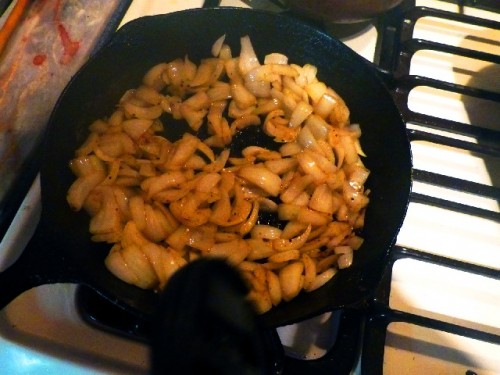 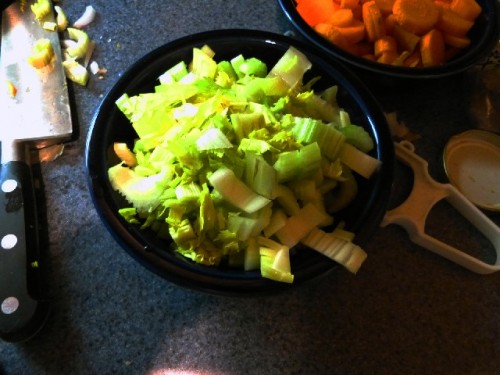 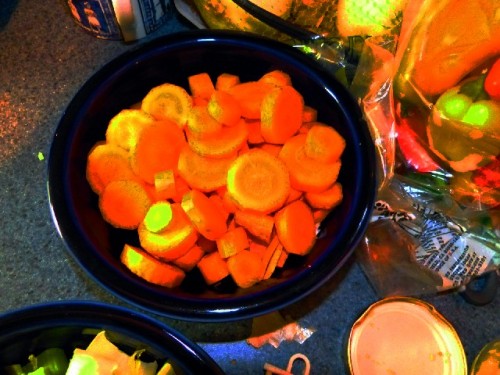 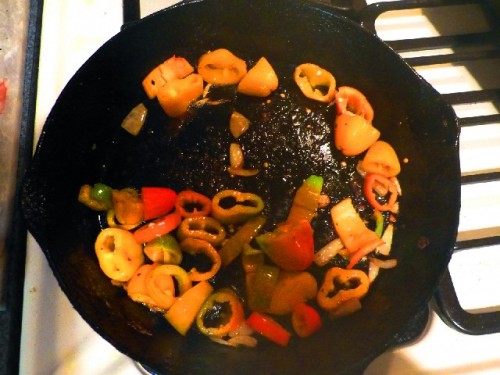 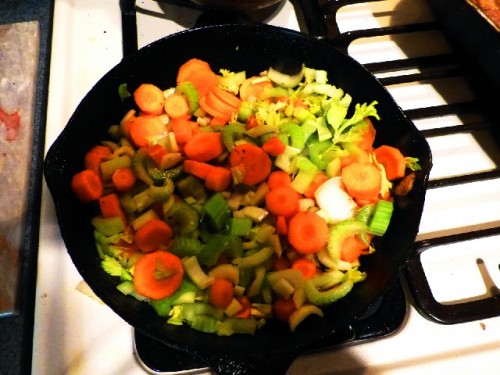 The carrot celery ,mix lightly cooked in the skillet. 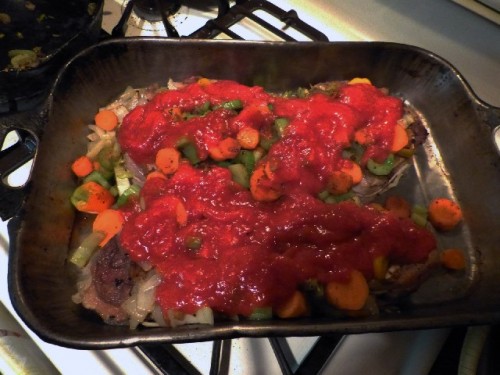 Half a can of crushed tomato over the top. 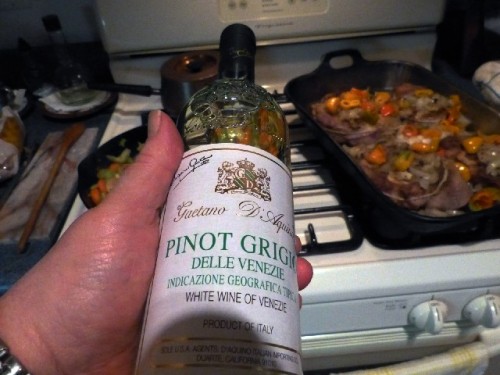 Most of a bottle of pinot grigio. 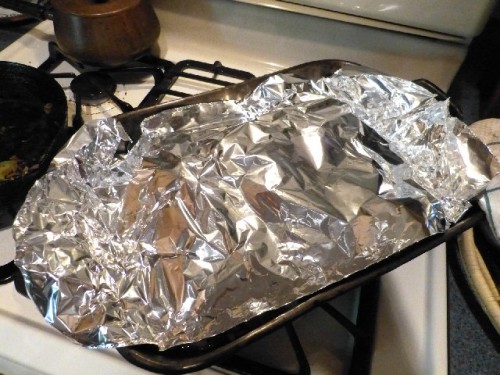 Covered with tin foil and baked for two hours at 350. 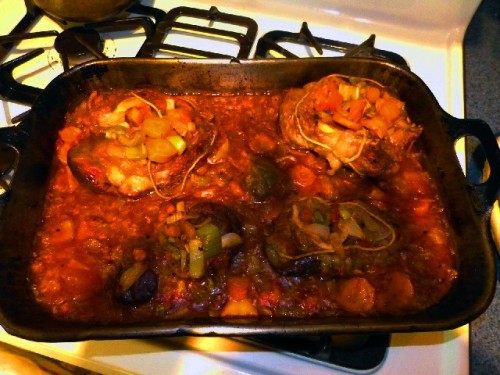 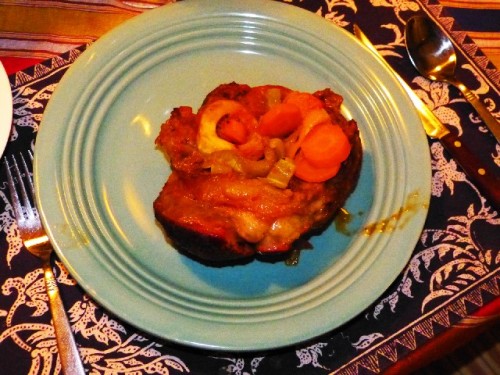 Back in the day Osso Bucco, slow cooking and simmering a cheap, tough cut of meat with braised vegetables, was essentially Italian peasant food.

In upper level trattorias and ristorantes it’s a gourmet item which I invariably order. When properly done the meat is so flavorful and there is the thrill of sucking the soft, gelatinous marrow out of the thick center bone.

We found a popular trattoria in Bologna, a city noted for its regional cuisine. There were a couple of fine meals there including pasta with Bolognese sauce. Of course. The trick was to show up early enough to get seated as there were no reservations.

His Osso Bucco, of course, was outstanding.

It’s what alla casalinga, or family style, should be.

Like the last of the Parisian bistros I charged into some years ago.

The owner showed me the book with months of advanced reservations.

In broken French I told her that I was not leaving before I was fed. Immediately.

Adding that I was a famous American, which at the time I was, more or less.

Perhaps less rather than more.

She caved under my hauteur.

It’s the only way to treat the French. Particularly middle-aged women.

Soon I was escorted to her private table and dined with her amused lover.

We caroused after that from bar to bar until dawn.

Ah to be young and gonzo again.

In Paris the city of lights.

Recently, on Netflix, we saw the wonderful film Haute Cuisine.

It was about an amazing woman, a real story, who was hired to cook for the private dining room of the President of France, Francois Mitterand.

There was a staff of some 25 professional chefs. But he didn’t like their fancy cuisine. What he longed for was the food of his mother and grandmother.

While not a professional chef, in fact a truffle farmer who served amazing meals in her country B&B, Danièle Mazet-Delpeuch, compellingly and charmingly played by Catherine Frot as Hortense, cooked food to die for. No frills. But the dishes we see her serve were, well, magnifique. There are wonderful scenes when Mitterand takes a break from affairs of state, to the utter consternation of his staff, hanging out in her kitchen. She makes him a snack of first of the season truffles on toast.

On the occasional Sunday my busy father liked to cook the traditional Sicilian food he learned from his mother. The preparation started on Saturday night. Of course he skipped church to finish the Sunday meal. We prayed for his soul that he might join us in Heaven. Since then, of course, I am going straight to Hell. Too much rock ‘n’ roll.

Often on Sundays, when every other week it was the maid’s day off, God bless our beloved Lillian, we dined out and went to the movies.

If Dad particularly liked a meal he would try to replicate it.

There were no cook books in our house. Not even the Joy of Cooking. No recipes. It was all magic and improvisation.

Mom wrote things down. As a newly wed in Brooklyn she watched his mom in the kitchen and took notes. As an Irish bride the survival of her marriage depended on learning to make a proper gravy. Mom could cook but never with fuss or fanfare. Her favorites were corned beef and cabbage or, on Saturday nights in the country, franks and beans. Her grandmother baked her own beans. Mom opened cans.

With some modification, my Dad’s style is how I like to approach the kitchen. I might go on line to explore several variations of a recipe then do my own thing.

That’s Astrid’s tradition as well. We like to surprise each other with special meals.

Growing up in Hamburg after the war she helped her mom cooking for the family and two brothers. Mostly she prepared those tough, cheap cuts of meat and offal. Which is what she always ordered at our favorite French restaurant in Montreal. Sadly, now closed. It had gotten so seedy which is precisely why we loved it. She always enjoyed a meal of their gizzards and kidneys. While I went with the duck confit.

During a Monday night gathering of twelve at the new Firehouse Café in Adams the conversation at our end of the table turned to food.

Laura, it seems, likes to cook at least one ambitious French recipe each week. Bruce commented that it is why they rarely dine out. It seems it’s better at home.

She explained always strictly following the recipe the first time. Then makes adjustments later on.

With the kids grown up and now living alone Irving likes to make a big batch of a special meal and freeze the leftovers.

With a generous expense account and world travel Robert developed a fine palate. That included dining at numerous Michelin starred restaurants. So he is very critical of food. When he has cooked for us the experience is simply amazing.

For myself, there was a time when I covered the movies and attended exquisite interview lunches at the Ritz in Boston. What incredibly memorable meals and service.

When I told my friends that I planned to make Osso Bucco for the first time they offered advice. No, insisted on it. It is a dish they had all cooked many times.

Astrid had prepared, never for us as we rarely eat beef, a German recipe when she fed the family. She added that they used to clean the bone and use it as a key chain.

Our friends asked what I planned to do. They were appalled when I admitted to not having the large, required Dutch oven.

Irving insisted that I come borrow his as well as consult a classic recipe.

For me cooking is not about having all the fancy-dancy stuff and elaborate gadgets. It’s about using what you have and improvising.

Which is what, if you peel away the layers of sophistication, I really am as Sicilian/ Irish. It doesn’t get more peasant than that. Like my thick legs and stubby hands.

So this is what I did.

I dried the shanks and tied them round with butcher string. That didn’t work out that well as the string came off during cooking. It’s intended to keep the meat on the bone when turned several times.

The shanks were coated with gluten free flour and browned in an iron skillet with olive oil and garlic. Then set aside.

In that skillet I cooked two sliced onions until softened. This I spread over the meat in a large baking pan. Large enough to hold four pieces of meat.

The recipes I explored called for a bouquet garni of fresh rosemary, thyme and other herbs. Which, in February, is not possible. So I combined a couple of crushed bay leaves, herbs de provence, rosemary and some other unidentified aromatic spices. It tied up the little sac and put in the pan. At the end of cooking Astrid squeezed it into the sauce and discarded it.

There were also four medium, chopped carrots and a generous amount of chopped celery. We happened to have some small, fresh, sweet red peppers. So I added those. After the veggies were lightly sautéed they were spread over the meat. This was topped with half a can of crushed tomatoes. In the summer, of course, I would have diced fresh ones.

Finally I added two thirds of a bottle of Pinot Grigio. Recipes suggest chicken or beef stock which I didn’t have handy.

The pan was covered with tin foil. Sacrilege. Then cooked for two hours at 350. The meat was carefully turned several times and the sauce basted over.

Most importantly, unlike my Dad, I totally cleaned up. It’s not fair for the home chef to make a mess for someone else. Astrid appreciated that almost as much as the meal itself.

Even after two hours of cooking she discussed the meat as delicious but still tough. She wants to cook the leftovers for another hour where I would be content with a half hour.

The sauce, however, was a nine. The vegetables, particularly the carrots, were just perfect and the wine and meat provided incredible flavor.

It may not be traditional but we served the sauce over gluten free penne.

Now that the recipe has been tested, hopefully, for a very special dinner party, we will serve it  for four. With a vintage French red wine.

This is where I do my Julia Childs imitation.

In this case, mangia bene.