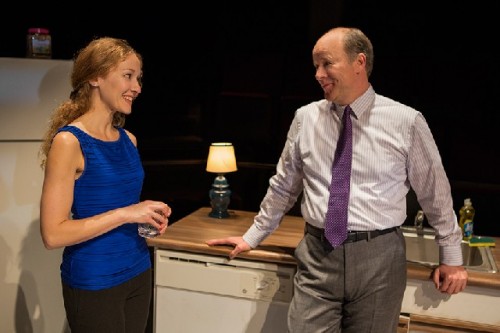 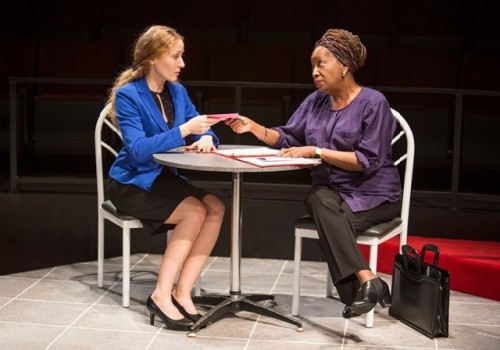 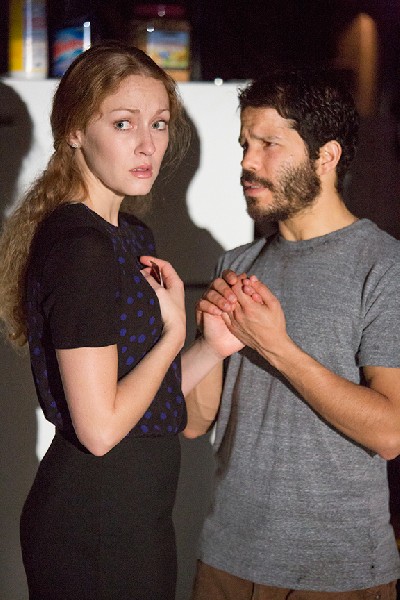 “Bethany”, written by playwright Laura Marks and directed by Gaye Taylor Upchurch, is a dark, tragic-comedy that chronicles the efforts of a young single mother who has been caught up in the economic roller coaster of the housing and financial market bubbles of 2009.  To figure out a way to survive, Marks’ heroine has to make some dangerous decisions.  The way the play is crafted, it’s more a case of style over substance and it’s sprinkled with more than few clichés about how to handle tough times in America.

New car salesperson Crystal (Jennifer Ferrin, in a strong performance) is on the brink of losing her job at a local Saturn agency.  Her pragmatic thinking supervisor Shannon (DeAnna Driscoll), drop hints about the agency going out of business.  Now her only goal is to begin an urgent search for solutions on how to get her life back on track following her bank foreclosure.  She ‘s a single mother of Bethany, her five year-old daughter, who has been placed in children’s protective care when it’s discovered that they have been living in Crystal’s car.  Her caseworker, Toni (a sympathetic Sylvia M’Lafi Thompson) assists Crystal, but warns her that if she makes any unexpected miscues, she could lose Bethany in the process.

Needing time to think and concoct a plan to get Bethany back, Crystal breaks into a foreclosed abandoned house, only to discover she’s not the only person looking for a roof over her head and time to think.  Gary (Carlo Alban) a homeless, unkempt, and paranoid squatter has already laid claim to the house.  But after talking to Crystal he agrees to share the space.  It becomes an uneasy, tense, détente, but not without risks.

The next day at work Crystal meets customer Charlie (James Shanklin), a slick-talking,  street-smart, business type with a “line” a mile long.  He’s a self-styled wealth-is-the- answer-to-everything, guru.  He says he interested in buying a $44,000 top of the line high-tech Saturn.  When Charlie senses how desperate the attractive Crystal is to make a sale, he offers to “negotiate” with her, after hours, up close and personal about the sale; taking great pleasure in humiliating her in the process.  Up against it, Crystal agrees.  Charlie may think he’s won the day, but his here-to-fore unmentioned wife Patricia (Amanda Naughton), has something to say about his “pyrrhic sexual victory” over Crystal.

“Bethany”, as a modern day story may resonate with some because of the financial woes so many Americans, like Crystal, find themselves in today.  But the resonating ends there.  The premise is problematic from the beginning in that it strains logic and credulity, plus it has a few too many  “plot-holes”(pun intended) that the core story keeps falling into.

Having said that, the actors, however, are solid in their performances.  Shanklin’s Charlie is a neat and subtle study of a greedy bully who simply must offend in behavior and cheat on the side.  It’s a delicious portrayal of a white-collar sleaze-bag.  Alban’s take on Gary, the homeless and the disenfranchised of the world, has the ring of authenticity, albeit, a crazy paranoid viewpoint.  Naughton’s “understanding wife” concerning Charlie’s behavior is puzzling.  He’s not Aristotle Onnasis, so money can’t be the reason she stays with him.   Obviously the answer must lie elsewhere.  Thompson’s caseworker Toni portrayal, is sensitively drawn.

As for Jennifer Ferrin’s Crystal, she literally changes and ages in front of you as she passes from crisis to crisis.  It’s a wonderfully nuanced performance of someone who feels the world is closing in and about to crush her but is helpless in being able to do anything about it.

The state-of-the-art Sheryl and Harvey White Theatre, has few equals when it comes to delivering technical requests from directors.  Lauren Helpern’s spare scenic design; Sarah J. Holden’s costumes, and Japhy Weideman’s night and day, lighting design, are all first-rate in this arena-staged production.