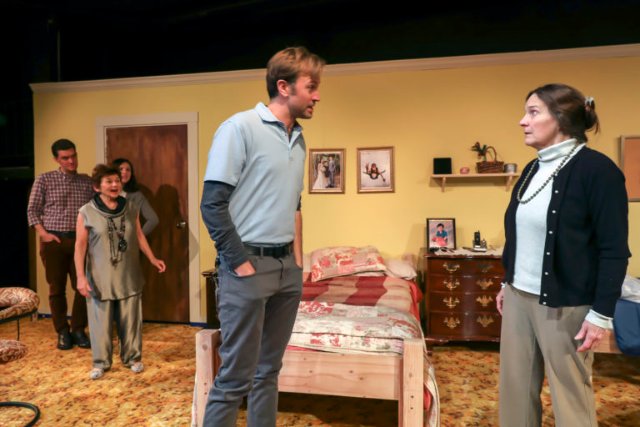 What do you get with a rollicking script by David Lindsay-Abaire about two profoundly opposite women sharing a room in an elder home? You get a distaff version of The Odd Couple on steroids called Ripcord. Altarena Playhouse offers a laugh-a-minute production of this often dark, but always uproarious comedy.

Abby is a dour, long-standing resident of the home who can’t afford a private room. But she has alienated a string of imposed roommates, so that she gets privacy between the exit of one and the arrival of the next. The recently-arrived roomie, ever-cheerful Marilyn, presents a special challenge. She loves the sunny room and has unusually high tolerance for Abby’s unpleasantries.

Credit Lindsay-Abaire for building a comedy not just around women, but older women whose motivations are not limited to the sole objective of doting on grandkids. He makes his female protagonists full-bore individuals with zesty personalities who are willing to fight tooth-and-nail for what they want.

Fundamentally, the play deals with basic dispositions toward life. One magnificent aspect of living independently and without employment is that we are free to act as we wish, without being answerable to others. But these women take opposite paths to personal realization. Marilyn is affable, sociable, and enjoys every minute of life, despite having had troubling issues to deal with in the past. Conversely, Abby takes everything seriously, and her desire for living without a roommate, despite the friction it causes, results in social isolation.

To resolve their lodging preferences, the two women engage in a bet. If Marilyn gets angry before Abby shows fear, Abby wins. Marilyn wins if vice versa. What ensues is a melee of practical jokes between two able opponents, from the high flying to the scary, with embarrassing incidents and revelations galore. Belly laughs abound with occasional apprehension as the two women lie, cheat, and steal in order to win.

The two key players nail their roles. Michele Delattre embraces Abby. Ever haughty, she conveys the woman’s malaise and demeaning manner with sarcastic humor. Ellen Brooks sizzles in the juicier role of Marilyn. A bundle of energy, she bounces on beds and brims with brio like a cheerleader on a winning team. Not quite your typical picture of an old lady.

The third wheel in the action is Scotty, the attendant, who forever does chores for residents. Jesse Lumb adroitly captures the easy-going, loping young man who never knows what to do with his appendages. He does however have a stern side, which Abby often provokes with her anti-social behavior. Through Scotty, the playwright also pays respect to the great bulk of theater artists who work full-time day jobs and who participate in performing arts for love, not for money. Scotty’s true love is acting, and he induces the two women to attend an interesting performance of his that also plays into their bet.

Director Christian Haines leads a creative team that provides a lively staging given limited resources. Tom Curtin’s single set depicts the residence room in great detail, though the action takes place in two other venues as well. To accommodate the staging of Scotty’s performance, lighting designer Michael O’Brien adeptly snuffs the main lighting to conceal the set and spotlights actors and props for that scene on the apron. Simon Liu’s sound design adds another dimension, especially having off-stage dialog and sounds often coming from various locations behind the audience resulting in a surround sound effect. In all, this production is an example of the fine entertainment that many of our community theaters in the Bay Area offer.

Ripcord by David Lindsay-Abaire is produced by Altarena Playhouse and appears on their stage at 1409 High Street, Alameda, CA through February 23, 2020.