Having Our Say: The Delany Sisters’ First Hundred Years, 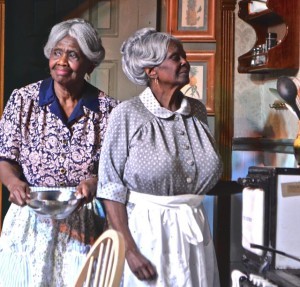 Watching the lives of two professional African-American centenarian sisters ages 101 and 103 unfold on stage, is like opening a time capsule and exploring its contents through culturally different eyes and time frames.

CV REP artistic director Ron Celona, who carefully selects his all-Equity productions for the season, has come up with another compelling and winning production in “Having Our Say: The Delany Sisters’ First Hundred Years”, written by Emily Mann.

It’s a tender oral history life story of the real-life Delaney sisters of Raleigh, North Carolina, who share their observations, experiences, anecdotes and memories of two lives fully lived in the time of Jim Crow law in the South; who then moved to the North, settling in New York City first in a vibrant Harlem and then into the white suburb of Mount Vernon.

Regina Randolph, to play Miss Sadie Delany, M.A. in Education. The sisters – who lived their entire lives together (neither ever married) – were known to be, not only warm, intelligent, charming and independent but when required they could be down-right feisty as well. They were ladies that didn’t suffer fools easily.

The sisters were the daughters of a former slave who became the first African-American elected Bishop in the Episcopal Church in the United States. They were also civil rights pioneers but their stories were largely unknown until Amy Hill Hearth, a reporter for the New York Times, interviewed them for a feature story in 1991 about African-American life in the 1890’s. Both sisters eschewed the phrase “African-American”, preferring to use the description “people of color or negro” when describing themselves.

The play is a touching journey of revelation when it comes to the history of the estimated 45 million African-Americans now living in the United States. Despite a long history of racism that’s been violent at times in America, the Delany sisters were always hopeful and optimistic about the America they love. All their feelings, concerns, and wishes for their native America are warmly, truthfully, and lovingly performed by H. Chris Brown and Regina Randolph.

Director Celona makes sure there is a safe and creative space for Brown and Randolph to work their magic. The rich and dense narrative script by playwright Mann covers both the ups and downs, hopes and dreams of the sisters’ remarkable life journey. The on-stage chemistry, between Brown and Randolph, which is critical in a two-actor production, is nicely achieved.

The technical team at CV REP is always first rate. The Set design by resident designer Jimmy Cuomo always amazes me how he can create so many open playing areas in such a small, finite space. Technical director and Lighting designer Eddie Cancel creatively abets designer Cuomo and director Celona’s personal vision. Costume designer Aalsa Lee, sound designer Randy Hansen, and Stage Manager/Technical factotum Karen Goodwin, makes sure everyone is always ready and on their toes.