A Weird but Entertaining Evening 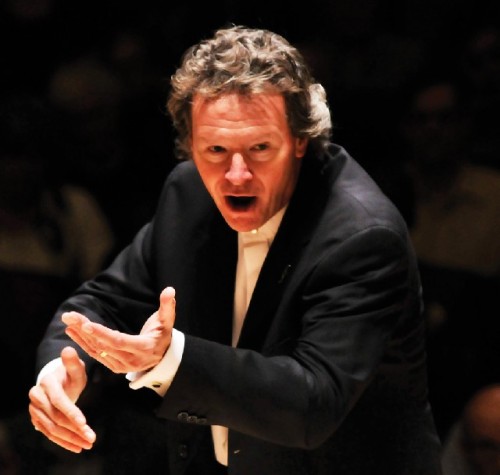 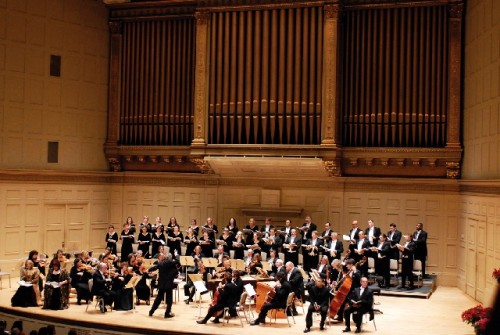 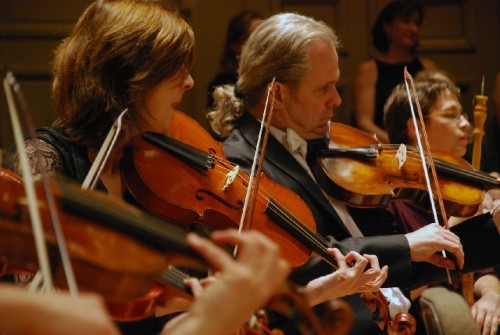 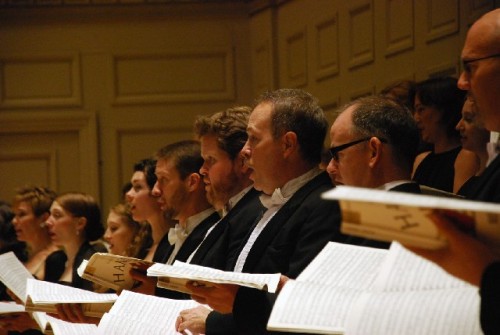 Friday night at Jordan Hall the venerable Handel and Haydn Society put on a weird but entertaining evening of music by Henry Purcell (1659-1695), whom H&H Society director Harry Christophers calls “the greatest English composer of all time,” which, considering the competition, is not such an outrageous claim. (Michael Tippett you were thinking?) The program was billed “Purcell: The Indian Queen,” but the featured work was played only after intermission; the first half of the concert included scenes from two other “semi-operas” by the composer, “King Arthur” and “The Fairy Queen,” as well as the final scene of “The Indian Queen,” composed after Purcell’s early death by his brother Daniel. If that isn’t confusing enough, the three works on the first half of the program were sung by the principals without scores and semi-acted in the manner local early music groups have perfected; the headlining work, however, was sung as if it were an oratorio, with the performers singing from the score and making no attempt to act.

I was somewhat disturbed that it was suggested that the music Purcell composed for Dryden’s play was the whole work, although I was grateful, as I am sure the rest of the audience was, that we were spared Dryden’s preposterous text set to his characteristically dry verse. I would have preferred it if the presenters had called it what it was, “Purcell’s Incidental Music to Dryden’s ‘The Indian Queen’,” like Mendelssohn’s music for Shakespeare’s “Midsummer Night Dream” is called “Mendelssohn’s  Incidental Music to ‘A Midsummer Night’s Dream’.” Both done in their entirety, spoken text and music, would make very long evenings.

I realize that my complaint is pedantic and that, as I said earlier, the evening was entertaining, which is what’s important. How could it not be? Purcell’s infectious melodies based on court and country dance tunes and folk songs with an occasional reference to English hymns and anthems performed by a crack period instrument band and sung idiomatically by a wonderful cast of solo singers and chorus. It was an entertainment, so why bother about its billing or the unusual structure of the evening? I doubt if more than a few others in the audience noticed or cared. But critics are paid (or not, as the case may be) to notice such things, so I feel obliged to state them up front.

As I’ve already said, Dryden’s play is preposterous, based on total ignorance of the history of what later became Latin America. Pre-Columbian Mexico is at war with Peru, and Montezuma, historically the king of the Aztecs, is presented as the leader of the Peruvian forces who goes over to the Mexican side because his marriage proposal for the Peruvian princess he loves is rejected. There is nothing in it to be taken seriously.

Although it shows no attempt to exploit the exotic local color, Purcell’s music is of another order altogether. Composed of either instrumental passages between (unspoken) spoken texts or songs sung by minor characters, an Indian boy and girl, for instance, who are first to be heard.

“The Indian Queen” provides an irrefutable example for people, like Samuel Johnson, who think that opera is inherently ridiculous. However, the arias by that Indian boy and girl as sung by tenor Zachary Wilder and soprano Jessica Cooper are lovely. (At least I think it was sung by Jessica Cooper, although it might have been Brenna Wells singing. The scheduled soprano, Teresa Wakim, one of the bright stars of the Boston early music scene, called in ill, and her assignments were divided among three choristers, demonstrating the depth of the H&H Society’s bench, but it was not made clear which arias the two sopranos substituting for her in “The Indian Queen” actually sang.)

There were other vocal pleasures: The dialogue between Fame, also sung by Wilder, and Envy, sung by British import Jonathan Best, featured colorful scene painting. When Best sings of snakes hissing, the music hisses, which Best, a wonderful character actor, makes vivid. Later in the 50-minute long piece, there was a delightful little concerto for recorder, bassoon and organ. And there was no end of infectious dance and folk tunes.

But those who were really expecting opera, music set to drama, would have been disappointed. The English seem to be allergic to the medium, and Purcell, organist of both Westminster Abbey and the Chapel Royal, was quintessentially English. Purcell wrote only one real opera, the sublime “Dido and Aeneas,” which includes one of the greatest soprano arias in the entire opera literature, “When I am laid to rest,” Dido’s lament in anticipation of her suicide. There is nothing comparable here. But as I have said, and I must stress it, it was all very entertaining.

The most entertaining part of the evening was found in the fragments in the first half of the program, which included two of the most memorable scenes from Purcell’s hybrid theater works. (Don’t call them operas!)

In the “Scene of the Drunken Poet” from “The Fairy Queen,” Best hilariously depicted the Drunken Poet (said to be a portrait of an actual poet of the day), staggering down the aisle of Jordan Hall onto the stage, where he was tormented by two “Fairies,” two choristers who wore stylish nightlife-type clothes. Best’s voice is deep and sonorous and remarkably flexible, and the two Fairies, sung by sopranos Margot Rood and Erika Vogel, had light and agile voices with clear high notes. I don’t think there was anyone in the house who wasn’t laughing.

“The Frost Scene” from “King Arthur” wins the prize of the week for best scheduling. On a night that was one of the most frigid in memory, it provided a brilliantly evocative scene. As the “Cold Genius,” Best stole the show, singing with a stuttering trill that replicated precisely how the cold makes one feel: “What power art thou, who from below/Hast made me rise unwillingly and slow/From beds of everlasting snow?/See’st thou not how stiff and wondrous old,/Far unfit to bear the bitter cold,/I can scarcely move or draw my breath?/Let me, let me freeze again to death.” The strings played with a staccato attack, which Vivaldi also used to similar effect in the Winter concerto of his “Four Seasons,” composed only a few years later. (There must be something about plucked strings that reverberates within the listener to evoke winter cold.)

Best proved the best import of the evening, demonstrating the power of character acting in song. Wilder, the only other credited singer on the program, possesses a sweet high tenor that goes naturally with the roles of young lover. The rest of the excellent cast was largely local.

“The Indian Queen” is rarely done, and after having experienced it, one can understand why. For all its merits musically, it takes a cumbersome form that doesn’t fit comfortably on the contemporary stage. One can understand why Christophers, who is also a British import, wanted to do it. I look forward to the group’s performance of Handel’s “Jephtha,” an oratorio by the great opera composer wrestled to the ground by English taste.