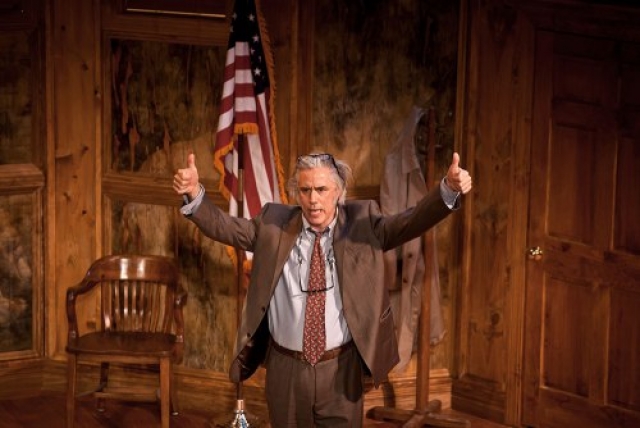 The season will continue with This by Obie Award winner Melissa James Gibson (“House of Cards”) and directed by Christopher Innvar (BSC’s The Other Place); Company, with a book by George Furth and music and lyrics by Stephen Sondheim, choreographed by Jeffrey Page (BSC’s Broadway Bounty Hunter) and directed by Julianne Boyd, and Gaslight (Angel Street) by Patrick Hamilton.

Inspired by Daphne du Maurier's chilling short story and the basis for Alfred Hitchcock's legendary film, this suspense-filled adaptation by acclaimed Irish playwright Conor McPherson is an emotionally stirring, atmospheric thriller. Mysterious masses of birds have begun to attack at high tide, driving strangers Nat and Diane to take refuge in an isolated, abandoned cabin and to form a bond to survive their haunting new circumstance. Yet if two is company, three is a crowd, as the sudden arrival of a young woman with a mysterious background ruffles feathers and quickly threatens to destroy their so-called sanctuary.

Music by Stephen Flaherty
Based on the novel Ragtime by E.L. Doctorow

At the dawn of the 20th century when everything is changing…and anything is possible, Ragtime weaves together three distinctly American tales - a stifled upper-class wife, a determined Jewish immigrant and a daring young Harlem musician - united by their courage, compassion and their belief in obtaining the American Dream. Winner of Tony Awards for Best Book and Best Musical Score, this exhilarating, dazzling musical is a timeless celebration of the American Spirit.

Taking Steps is a laugh out-loud, riotously funny comedy. Elizabeth, a former dancer, will do anything to escape the overbearing clutches of her rich husband, Roland, who is poised to buy a haunted house (a former brothel). The dithering, confused Kitty, briefly reunited with her monstrously boring husband, will go to extraordinary lengths to elude his sleep-inducing presence. Put into the mix an inarticulate solicitor and a builder who is a motorcycle maniac and you have one of Ayckbourn’s funniest, and most heartfelt, comedies.

This captures the hilarious yet touching relationships of a circle of friends as they back their way into middle age. "Its confused but lovable characters are drawn with a fine focus and a piercing emotional depth; the dialogue sparkles with exchanges as truthful as they are clever." (New York Times)

Music and Lyrics by Stephen Sondheim

Winner of 6 Tony Awards, Stephen Sondheim’s groundbreaking musical is a brilliant ?and wildly funny look at relationships. Over a series of dinner parties, dates and conversations with his friends, the perennially single Bobby attempts to understand the pros and cons of marriage - and the meaning of the word "commitment." A masterpiece by one of the greatest composers of our time.

By Patrick Hamilton
Directed by TBA

“A form of manipulation through persistent denial, misdirection, contradiction, and lying in an attempt to destabilize and delegitimize a target.”

Gaslight, also called Angel Street, and made into a movie starring Ingrid Bergman, is one of the greatest psychological thrillers of all times. It tells the story of Mr. Manningham, a suavely handsome man, who is slowly driving his gentle, devoted wife Bella to the brink of insanity with seemingly overwhelming kindness while sowing seeds of doubt, memory loss and misperceptions. The playwright has built and sustained some of the most brilliant, suspenseful sequences in modern theatre. A surprisingly timely play for 2017.