The Zincograph by Vladislav Todorov

The compelling Bulgarian film was screened at the Palm Spring International Film Festival. 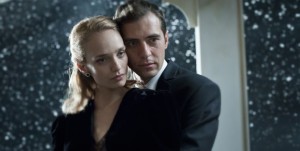 When it comes to post Soviet (1989), absurdist, dark political satire with a desire to shake things up – call the Bulgarians.  They do the tongue-in-cheek bit with such plausibility and devilish fervor I feel the filmmakers may be in for a little “questioning session” when they return home following the Palm Springs International Film Festival.  If this film were an American made movie with this storyline, the creative team would probably be facing a congressional panel of Senators about now.  It’s a pity that American politicians have no sense of humor when it comes to telling it like it is, or when their hypocritical sensitive eyes have movie/media and press fingers poked into them.

The screenplay written by Bulgarian educator and novelist Vladislav Todorov is based  on his novel “The Zincograph”.  It’s a wildly inventive and whimsically directed movie by Emil Christov that stars Ruscen Vidinliev in a winning performance in how to succeed in Balkan politics without really existing.  His slick, send-up comedy performance is worthy of Alec Guinness in “Kind Hearts and Coronets” or of a Peter Sellars performance in an irony-packed “Dr. Strangelove”, or with a stretch, a Tom Courtenay portrayal as a habitual prevaricator, in “Billy Liar”.

The story revolves around Batko Stemenov (Ruscen Vidinliev) a young Bulgarian university student who has been recruited by the secret police to spy on a group of his fellow students.  Over a three-year period most of Batko’s assignments have been totally absurd, and his reports even more so.  But after a blunder by his landlady, he is fired from his low-level spy job.  Attention Viewers!  Hell hath no fury like that of a scorned, dismissed, and disgruntled spy.  In practically no time at all, Batko begins his revenge plan.

Step One:  conjure up his own imaginary spy network and turn it against his former masters.  Step Two: Employ the same techniques used on him, taking care to document every facet of his imaginary spy network, which he names the SEX Department.  Then sit back and watch his former bosses squirm as their cupidity-filled world crumbles after 1989.  But, beware the backlash or too much self-satisfaction.

The supporting players: Irena Milyankova as Batko’s girlfriend, Lilia Abadjieva as Pravda, Deyon Donkov as Kolakov, and Rucsey Chanev as Mlyakov, are uniformly fine in making this film a satirist’s delight. The film is at its best when poking fun at its communist-styled regime.  The Kafkaesque tone is what makes the film so surreal, but at the same time, so plausible, and as a result, provide delicious guffaw-inducing moments throughout.  The underlying theme in this comedy of Balkan politics is the desire by practically everyone to collaborate and luxuriate in the pleasures of spying on others.

With the wide use of today’s Internet as an unwitting co-conspirator and collaborator, it’s no wonder today’s governments are eager to gather as much personal information about its citizens as possible.  “The Color of the Chameleon” may not be everyone’s cup of tea, but it just struck an absurdist chord in me, which I thought might make it a worthwhile film for people to see.