The Good Person of Setzuan at Fort Point 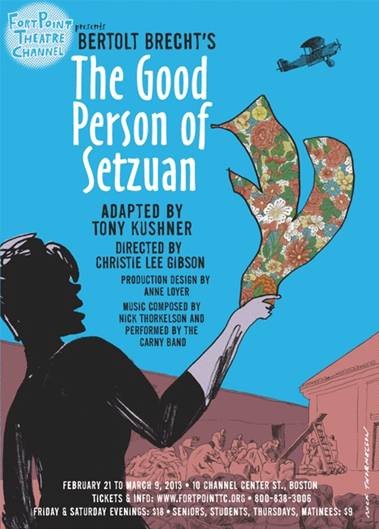 Bertolt Brecht and Tony Kushner are among the most entertaining and provocative playwrights in the history of theater. Put them together for The Good Person of Setzuan and the result is an exhilarating parable of love and money, written by Brecht when fascism was rising in Europe and grounded by Kushner in the social and economic realities and relations of our own time.

Fort Point Theatre Channel (FPTC) core member Christie Lee Gibson who directs The Good Person of Setzuan is an opera singer, actress, and creator/producer/director/coach of musical-theatrical happenings. She points to the great story that Brecht and Kushner tell. “With its wealth of colorful characters,” says Gibson, “the play is both funny and heartbreaking.” “Brecht's humor engages us,” says Gibson, “even as he tells an earth-shattering story about the impossibility of being good in the world.”

As the tale begins, a motley crew of three gods arrives in Setzuan. They are searching for one good person who will be revealed simply by offering them a bed for the night. But everyone fears a visit from the gods — except for the prostitute Shen Te. She takes them in, and they reward her handsomely so she can do good for all who need her help. Soon, though, Shen Te is up against a dilemma: more help is needed than she can possibly give. With new music composed for this production, she sings to the gods “To be good and to live / Split me, like lightning, in two.”

The production will take place in the temporary home of Fort Point Theatre Channel, a vacant 5,000 square-foot commercial space in an artists’ neighborhood threatened by explosive development. Despite that large space, seating will be limited. FPTC visual artist Anne Loyer, who leads the design team for The Good Person, and Gibson have conceived an intimate production that brings the audience and the actors together to explore basic questions about living in our modern world.

Loyer’s design, with movable screens and giant fans manipulated by the actors as set crew, draws on her work as a visual storyteller maintained throughout her career. Her work has ranged from two-dimensional fine art, to narrative animations, to public art projects and performances that incorporate audio and video in collages based on the lives of real people. Loyer also co-curates a project called "Tamziq, Scattered and Connected," a multifaceted international and local collaboration between artists and students from the United States and the Middle East, with a focus on Iraq. In May, she will lead FPTC’s premier production of Tamziq: Scattered and Connected as part of this project.

Gibson, who doubles as artistic director of OperaHub, describes the world she and Loyer are creating as “a distillation of the relationships between people, as well as between people and their environment.”  Brecht's use of characters with names like The Landlady and The Carpenter, she says, “bring out the ways each of us takes on a role and fits into a society larger than the problems of any one individual."

FPTC founding member Nick Thorkelson, the composer, will lead the four-piece Carny Band, providing original live music for the play's many songs. Just as Brecht and his collaborators created theater songs based on German dance hall music of their era, the Carny Band will carry the tradition forward in musical riffs derived from doo-wop balladry, gospel, new wave, gypsy jazz, and more from our own times.

Thorkelson has performed in various rock, blues, soul, and reggae bands, including Boston’s first reggae band, Jamaica Hylton. He co-wrote and helped stage a workshop production of Defarge, a musical based on A Tale of Two Cities Collaborating with Thorkelson is his brother, Peter Tork, formerly of The Monkees. During the run, Tork will be making periodic guest appearances with the Carny Band.

Fort Point Theatre Channel is dedicated to creating and sustaining new configurations of the performing arts. They bring together an ensemble of artists from the worlds of theater, music, visual arts, and everything in between as a forum for collaborative expression while enriching the Fort Point community, Boston, and beyond.