How to Transcend a Happy Marriage by Sarah Ruhl

Custom Made Theatre in San Francisco 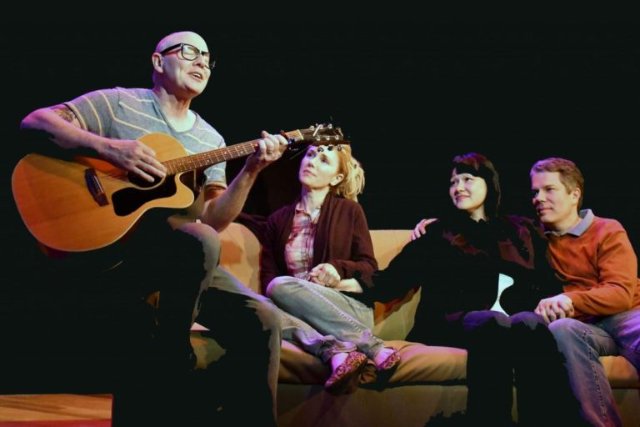 In the 1969 movie Bob & Carol & Ted & Alice, a punctuation point of the 20th century’s sexual revolution, two married couples swap partners. The promotional photo of that foursome happily sharing the same bed is indelibly imprinted on the minds of a whole generation of movie goers. Sarah Ruhl updates the concept of sexual fluidity with some new complications – like three added participants in the mix and an unfortunate intrusion into the proceedings. Although the playwright’s intent and narrative often lack clarity, the dialog is clever and the situations amusing. In the hands of a fine ensemble of actors, Custom Made Theatre offers a very funny and provocative production of How to Transcend a Happy Marriage.

The central theme of the play concerns love relationships involving more than two people. George (short for Georgia) and Paul share a deep and idyllic friendship with Jane and Michael. The group becomes polyamorous-curious when Jane tells of a co-worker, Pip, who shares an open love relationship with two men. Without hesitation, the four friends decide to invite them for a party on New Year’s Eve.

They are not disappointed with the eye-opening experience of celebrating with the three sexual bohemians. Among other amusements, Pip regales the crowd with a writhing rendition of “She’ll Be Comin’ Around the Mountain When She Comes” that gives the song new dimensions that you’ll never forget. With inhibitions diminished by cannabis brownies contributed by the guests, the four friends fall into an ecstatic orgy. While no precursor in their relationship would have predicted this sexual smorgasbord, no hesitation occurs; no regret or embarrassment follows; no desire to continue the practice is intimated. So does the playwright mean to suggest that married people welcome an escape from monogamy, or that a torrid sexual tiger dwells within waiting for the right cue to be released? George does observe aloud the curious social expectation in which women participate in sex in order to have children, but should be sexless crones afterward. Perhaps this is a rebellion against that stricture.

In addition to polyamory, Pip, played by a scenery-chewing Fenner, maintains another eccentric practice. She kills all of the meat she eats. A former vegetarian who lacked energy in the absence of meat consumption, she decided to take up flesh consumption again only if she could kill her meat “ethically.” George is taken by the idea and later joins Pip on a bow-and-arrow hunt for game, but the misadventure lands the two in the hoosegow. The ethical-kill sequences provide for some colorful description and humorous events, but what are we to make of them? Even if the concept ethical kill has merit, it’s clearly not doable at a modern societal level. So what is the takeaway here? Is it just a jab at the justifications that proponents give for their adopted forms of vegetarianism?

Whereas Pip activates the jolts to placid suburban life, George narrates as its voice with soliloquys directed at the audience. Karen Offereins delights as George, embracing the contradictions of her adventuresomeness and her apprehension, but the problematic elements of the script also center on her. Act 2, while still funny, introduces magical fantasy that presumably reconciles in Ruhl’s mind, but will escape many in the audience. In one instance, George refers back to the orgy as including Pip and her boys, but the other friends insist that it was just the four of them. In another, Pip implausibly dematerializes when she is with George. Finally, a white dove mysteriously appears and lays three eggs which ultimately end up in George’s hands. So, is George delusional about some of these happenings? Is Pip the dove and the eggs suggestive of the richness of polyamory? Or do these events simply endorse Pip’s freedom from the shackles of conventionality?

Kudos to Director Adam Sussman and Intimacy Choreographer Maya Herbsman for orchestrating the fine cast. Add Matt Weimer, Hilary Hesse, and Malcolm Rodgers as George’s conventional friends. Nick Trengove portrays Pip’s effete lover David, and Louel Senores is the loopy lover Freddie. In addition, thanks to the director for eschewing the potentially grisly depictions of dying or dead animals, which Custom Made’s recent The Goat, or Who is Sylvia? did display. Animal lovers appreciate the discretion.

How to Transcend a Happy Marriage by Sarah Ruhl is produced by Custom Made Theatre and plays on their stage at 533 Sutter Street, San Francisco, CA through February 9, 2020

From For All Events.