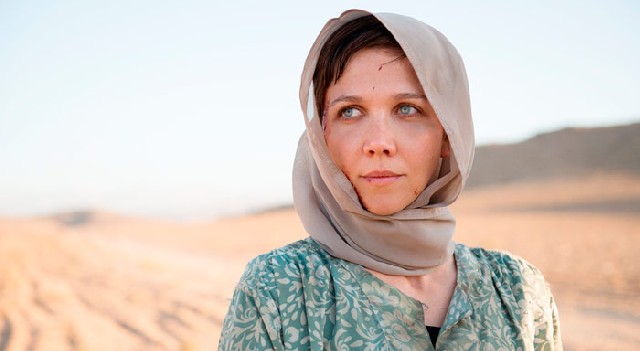 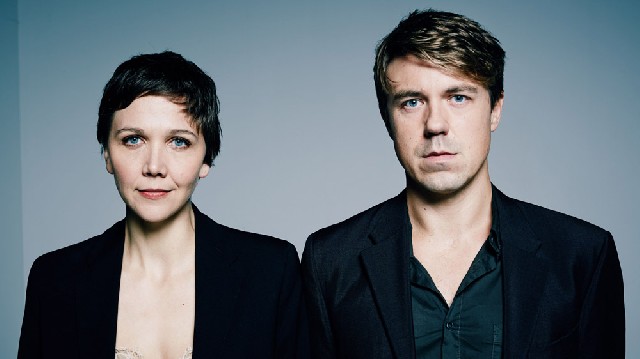 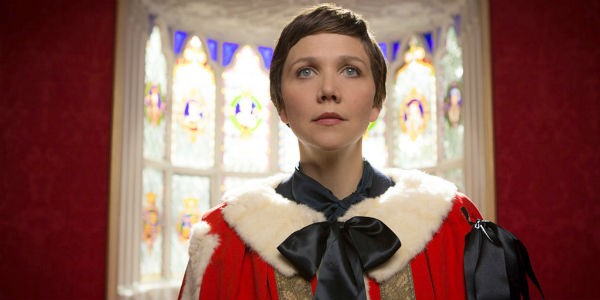 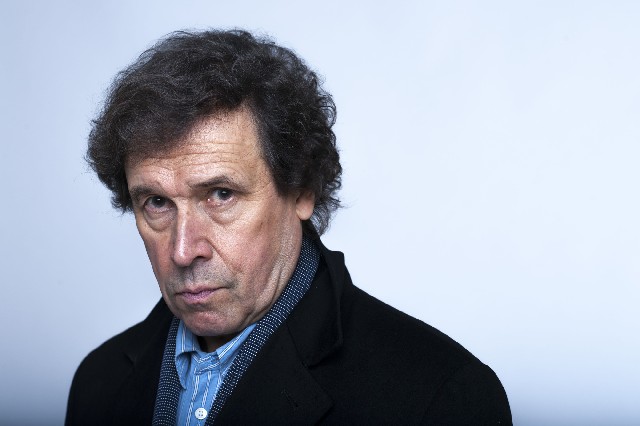 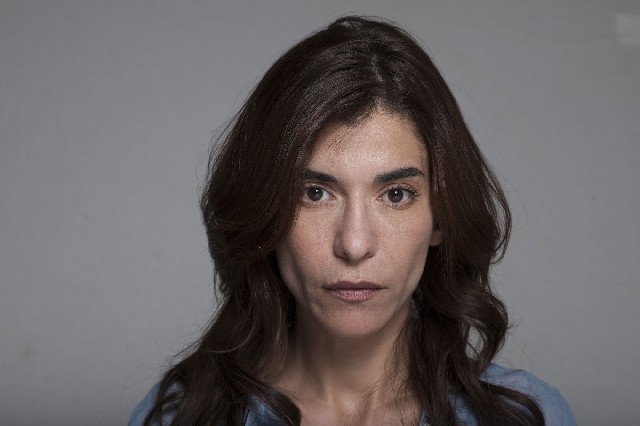 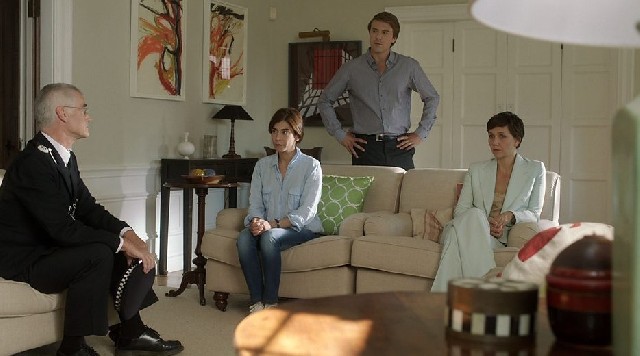 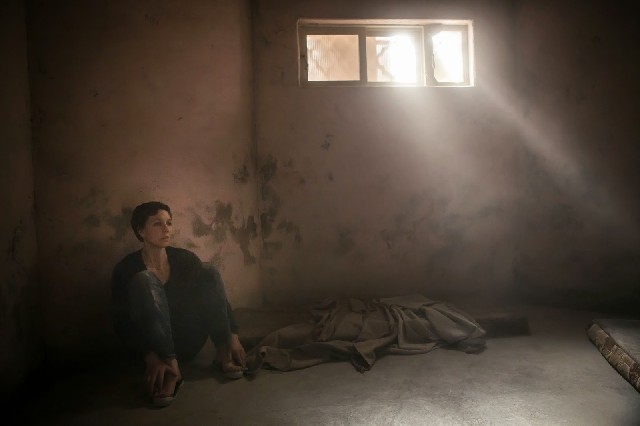 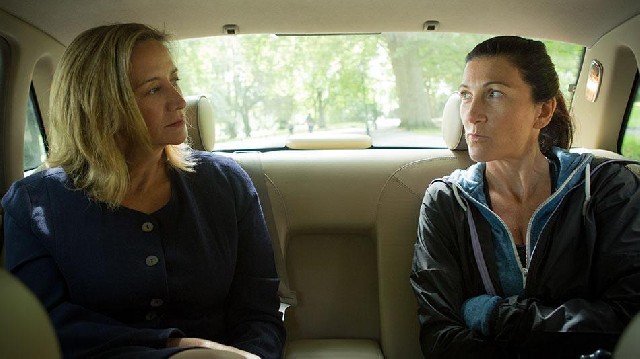 Infighting in the Old Girl network of the spy game. 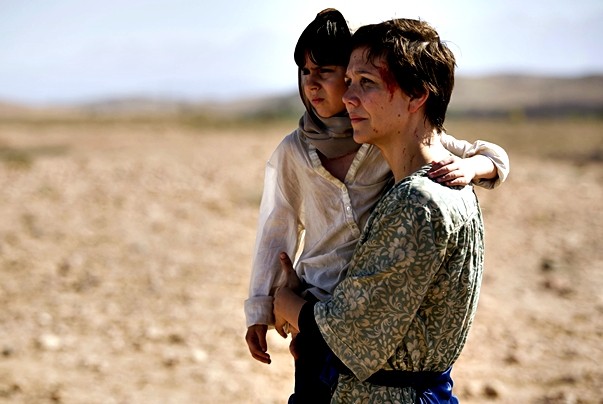 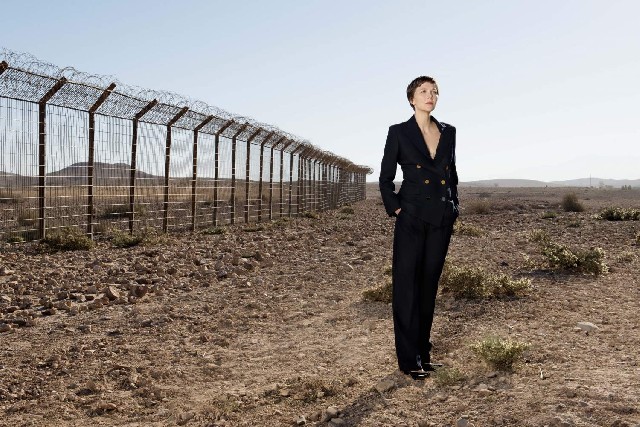 On the border separating war and peace.

During the first of eight episodes of the mini series The Honourable Woman Nessa Stein (Maggie Gyllenhaal) is shown in the robes of a recently titled British Baroness. Just prior to this we see Nessa as a child playing with her brother Ephra (Andrew Buchan) at a restaurant. Her mother died in childbirth. They are dining with their father Eli an arms maker who made a fortune selling weapons to Israel.

A waiter plunges a knife into his neck and blood splattered on the shocked toddlers.

The siblings are now adults and for reasons that will be revealed at a suspenseful pace Nessa now heads the company initially run by Ephra.

With a chilling corporate efficiency the Baroness reveals to the assembled media plans for phase two of bringing fiber optic cable and high speed communications to the Palestinian territory of Gaza. The Stein Corporation once intent on crushing enemies of Israel is now mandated to bring peace through communication opening up opportunities for education and trade. They sponsor young musicians and a university open to Jews and Arabs.

With this nuanced and harrowing performance forget what you previously thought of Gyllenhaal. While always competent she has never been as impressive as with this career defining role.

She is an actress with a somewhat enigmatic appearance and persona. Among leading ladies she lacks a singular face or body. There is plainness to her particularly when compared to more stunning Hollywood stars. She has never been particularly convincing as a love interest.

With irony all of those enigmatic characteristics turn in her favor in creating a unique, driven, conflicted woman in a position of leadership under enormous personal and professional pressures. Essa is frequently deadpan in facing daunting adversity through relentless manipulation from enemies she hopes to conflate in peace. In pursuing her goals she endures two kidnappings, rapes and assaults. Including some of her own doing through misjudgment.

Given the family history the Steins are the target of constant death threats. Living in luxury they are surrounded by an entourage of body guards, advisers and servants. At night Nessa sleeps in an austere safe room adjoining her bedroom. It underscores the terrible price of living a life of power and privilege.

Nessa emerges from the most incredible ordeals with an astonishing semblance of balance and insight. Given the strength of her performance the awards it has garnered come as no surprise. Gyllenhaal is a Nominee for the 2015 Screen Actors Guild Award for Outstanding Performance by a Female Actor in a Television Movie or Miniseries and has been honored by the Hollywood Foreign Press Association with the Golden Globe Award for Best Actress In A Miniseries Or Television Film. The project was produced by SundanceTV and the BBC.

Over four nights we binged on the series with brilliant writing providing constant plot twists and surprises. We come to understand the mantra of trust no one. Including family, the closest friends, and seemingly loyal advisers.

“Who do you trust? How do you know? By how they appear? What they do? So when you think about it like that, it’s a wonder we trust anyone at all” Essa asks.

The series has been brilliantly written and directed by Hugo Bick. When, after just eight episodes, it came to a breathtaking and entirely unanticipated end we longed for another season. But this proves to be a memorable and astonishing one off. Because most of the leading characters were killed in an over the top finale there is really nobody, other than Nessa and a handful of survivors, to sustain a sequel.

While eight episodes are structured around Gyllenhaal’s complex portrayal of Nessa there is a first class supporting cast and rich array of every shade of villain and betrayal. Including entire governments like Great Britain, The USA, Israel and the Palestinians.

Widely seen as a starry eyed optimist and do gooder she is pitted against many plotting to manipulate her efforts for peace. They scheme to use the communications network she is building subverted to their own advantages. In one on one scenes Nessa is seen coldly holding her ground while staring down every shade of opponent.

Her performance, however, reveals the seams and cracks of vulnerability that allow for exploitation, deception and misdirection. Everyone is playing her and we watch with fascination the moves and strategies of a wide range of interests.

The Brutus to her Caesar in all this maneuvering is Atika (Lubna Azabal) her translator and eventually Ephra’s housekeeper and lover. It is Atika who convinces Essa that they can slip into Gaza for secret meetings with Palestinians to advance her efforts. They are captured, raped and held for ransom.

Ephra makes concessions to liberate Essa with consequences that she is unaware of. These include his stepping down and being replaced by her as CEO. Essa returns home with a “secret” that is used by the Palestinians to manipulate her.

We are intrigued by the complex and absorbing spy game. While advancing the interests of their nations we see most of these characters as ruthless and self-absorbed.

The notable exception is a spy on the way out performed by the renowned character actor Stephen Rea (as Sir Hugh Hayden-Hoyle, the outgoing head of MI6's Mideast desk). Bick has wonderfully fleshed out his character which makes Rea the second most interesting actor in a superb cast.

The veteran spy is the most astute in connecting the threads of a complex scenario. We also discover that he has a true sense of humanity above and beyond the infighting over his professional status. It seems that, in what appears to be an Old Girl network cleverly depicted in this series, he got his job by sleeping with the boss. Isn’t that a nice twist. But she is now bored with him and other women are manipulating to replace him. He is committed to seeing through this one last case. As a sidebar he would like to win back his estranged wife. How quaint.

As we have come to expect of Rea he is masterful in shading his characters and upping the game of every actor in scenes with him. Other than Nessa he is the only character that we truly root for.

Unfortunately, the outstanding mini series will soon rotate off of  Netflix. Binge on this one ASAP.