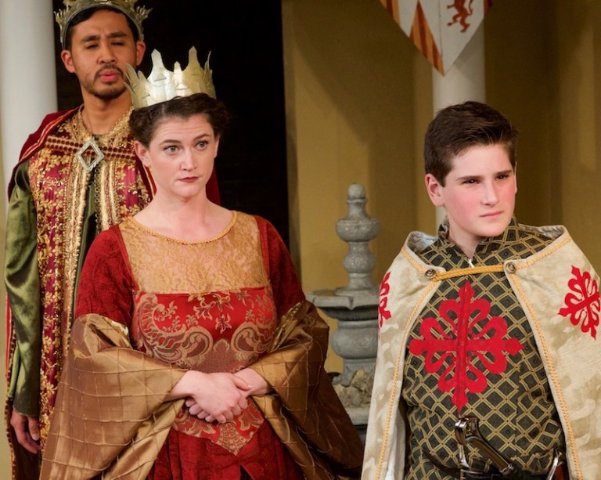 Spanish playwright Lope de Vega wrote a compelling drama about a village that rebelled against its lecherous overlord to protect its women—a very 21st century story. De Vega wrote it 400 years ago about an event that took place in 1476. City Lit Theater is staging Fuente Ovejuna in a new adaptation written and directed by Terry McCabe.

City Lit gives this a brisk 80-minute staging (including an intermission!) and manages to tell the story fully, covering all important details. (The most recent Chicago production was at Court Theatre in 1991. The play isn’t staged often, but runs more than two hours if staged uncut.) Jeremy Hollis’ scenic design provides a village plaza with fountain, circled by arches, doors and passages that McCabe uses to move the cast of 16 around.

The headline? The villagers of Fuente Ovejuna murder the commander or overlord of the town because of his licentious ways and famously protect the identity of the person who carried out the deed.

Laurencia (Carolyn Plurad), the daughter of the mayor, and Frondoso (Brian Bradford) want to marry. The commander, Fernan Gomez de Guzman (a polished Varris Holmes), abetted by his soldiers, practices his droit de seigneur by taking young women and wives to bed as he pleases. The commander determines that he will have Laurencia and has his soldiers torture Frondoso as he captures and attempts to rape Laurencia. The other young women of the town—Pascuala (Kristen Alesia) and Jacinta (Carlyle DePriest)—are similarly treated by the commander’s soldiers.

The Mayor (Rob Grabowski) and the villagers meet to plan a strategy and decide the commander must be killed. They carry out their plan but the crime is reported to Ferdinand (Mark Tacderas) and Isabella (Elizabeth Rentfro), who send the Inquisitor to Fuente Ovejuna to find the murderer. In the most famous scene, the arches surrounding the square become racks where soldiers torture the villagers. The Inquisitor (Jimmy Mann) demands to know who killed the commander. Each person shouts defiantly, “Fuente Ovejuna!”

The historical background is the effort by King Alfonso of Portugal to take over the throne of Spain, held by Queen Isabella of Castile and King Ferdinand of Aragon. Also part of this history is the Order of Calatrava, led by the young Rodrigo Tellez Giron, Master of Calatrava (Daniel Pass). Calatrava was a religious military order with allegiance to the Pope, not to any king. Thus, after Spain defeats Portugal, the Master goes to the King and Queen and begs their pardon for the acts of his soldiers. (City Lit’s playbill includes helpful background on all this.)

Carolyn Plurad is inspiring as Laurencia. Varris Holmes is solid as the commander, but is perhaps too smooth and not as evil as his persona might suggest. Some of the performances are a bit wooden, which affects the overall quality of the production.

Beth Laske-Miller’s costume designs are an important element of this otherwise simply staged production. Lighting design is by Eric Watkins.