From Velasquez and Goya to Men in Modernist Paintings 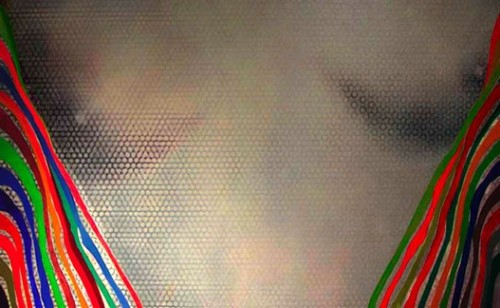 In this recent painting Barreres conflates Color Field painting and a male torso. 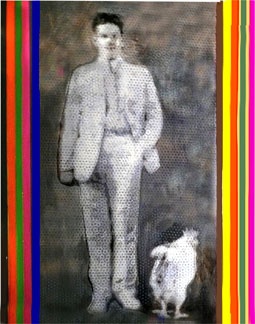 The chicken recalls its use in Combines by Rauschamberg. 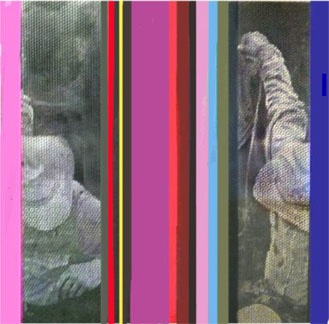 A recent work in the Men and Modernism series. 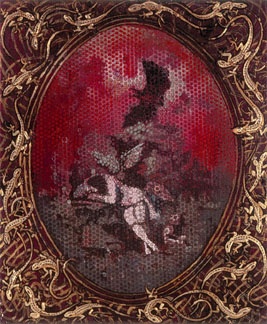 Aperture 1 from the Spin series. 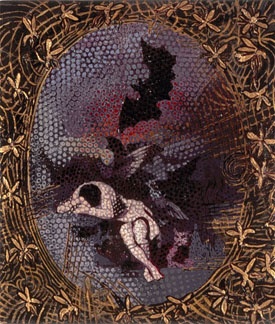 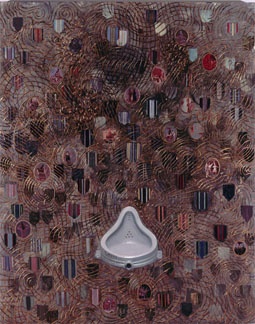 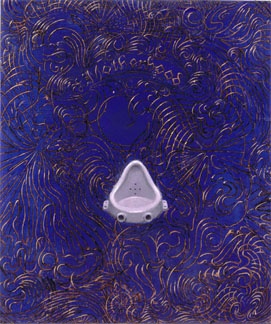 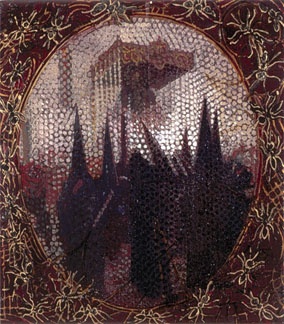 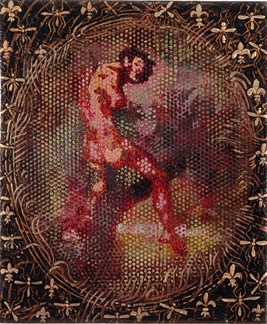 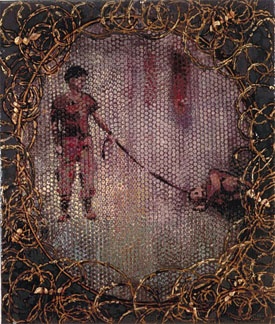 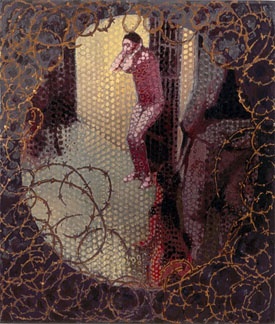 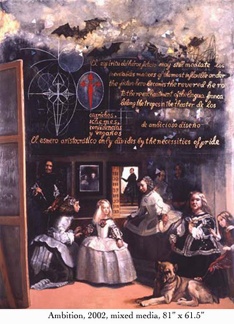 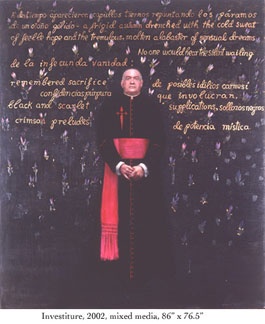 The Artist in the Las Meninas series. 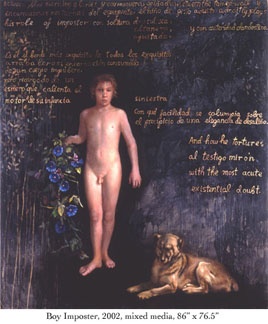 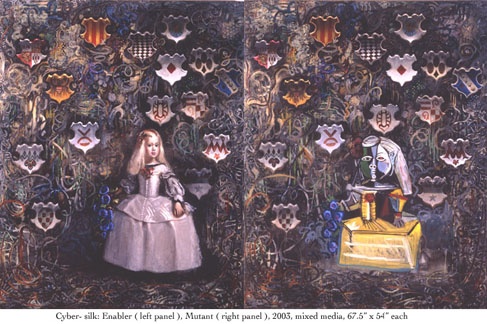 In this group of paintings, executed from 2006 to 2008, I use images from newspapers, magazines and Internet. Many of these images I have been collecting for a long time, keeping them in the memory of my computer until I could find quality time to pay attention to them.

The method and technique of facture mimic the half-tone dot matrix of black- and- white mediated images (no pixels), which I develop using layers of sprayed paint through stencils of perforated metal or plastic. The format may appear as a central image, a fragmented narrative or as the poetics of pastiche

Loose quotations from works of such icons of modernist painting as Morris Louis and Kenneth Noland, serve as an inoffensive, hyper-designed, pseudo- corporate aesthetic packaging device to showcase the images of the males who populate these paintings, and who illustrate the socio-politico-sexual tension generated by what some continue to perceive as contemporary pathologies.

Scales of Spin was not the original title of this suite of paintings. Instead, it was simply called Scales..

The events of September 11, 2001, made it impossible for many artists, including myself,
to ignore the potent unleashing of complex emotions, but the two groups of early works I painted in order to come to terms with my inner demons were unsuccessful. Even the technically worst photo taken at ground zero would have had more visual power. I destroyed these works, but they served to lower the level of poison in my system.

The three things that these two groups of works had in common were the cosmic scale of the intense blue sky, the city-scaled black smoke and white ash, and the smaller, human scale of fear, pain, grief, shock, despair and death.

A less specific and larger interaction of contrasting scales, meanings, functions and categories  began surfacing with chaotic urgency. The planes of reference still contained the cosmic and  human scales, but now there entered other conflicting dimensions: ideologies, religions, cultures, traditions, the present, the past, the future (afterlife?), justifications, rhetoric, spin!

The present suite of paintings was only partly conceived two years ago. The paintings
changed considerably as world events unfolded, but they were never intended to be informational or sermonizing. They are neither documentary nor allegory.

Certainly, the images are confiscated from sources I consider culturally significant. One can find references to militaria, rank, the Spanish inquisition, Goya's etchings, Duchamp's Fountain, etc. I intentionally use mimetic devices to program response, but the promise of transparent meaning is, and must remain, frustrated.

The apparent narrative of the images is incomplete, just a piling up of fragments with no strict idea of a goal. Also, their apparent literal level hasn't always an assigned referent; its function is, perhaps, to proclaim their artifice.

As the work changed and unfolded during these last two years, I renamed it Scales of Spin. In quantum theory, spin is a property of the electron. It is a word that refers to a function of interaction, but it is a misleading word since electrons do not spin. Relativistic quantum field theory does not allow for easy visual examples from our daily experience.

In our contemporary use of the word spin in everyday jargon, it comes close to meaning a lie Rhetoric may be anchored in some partial truth, but its aim is to convince someone about something despite all the perceived evidence to the contrary.

Duchamp's urinal, renamed Fountain, was elevated to the status of icon of 20th century art  although the evidence showed, and continues to show, that it is a urinal, and more specifically, a  urinal from a public restroom. Its recontextualization, its relocation inside a canonical art-space, was the authored, creative expression that transformed the original offensive referent into a provocative suggestion that it is now a vessel worthy of admiration.

To this expression by Duchamp, I externally apply another expression, which restores,  even if very slightly, the urinal's original offensive presence by recontextualizing it in my painting.

Quite purposely, the appearance of the paintings is in many ways traditional. Images are mimetic, painted in oils using brushes. The pictorial space, a shallow, pulsating field of  varied permutations, has false limits. It is reminiscent of baroque painting, perhaps.

All the paintings are on wood panels sealed with shellac. A computer-generated drawing may be transferred, projected or glued to the surface of the panel with contact cement. The drawing  starts with a grid that is selectively twisted, spherized, twirled and pinched in PhotoShop.

After the drawing is in place on the panel, the whole surface is covered with resin mixed with some metallic powder. When the resin has cured and is dry, it is sanded smooth, but retains enough tooth to make a ground ideal for painting.

I start with water-based paints such as gesso and watercolor. For the metallic powder paints, I use shellac as binder. The whole surface is coated with a mixture of Liquin, Sinvar varnish and linseed oil before the oil paint is applied at the final stage.

The drawing of the complex web (the distorted grid) may stand for curved space at a cosmic scale, but the gold paint gives it a decidedly ecclesiastical edge, akin to the gold embroideries  on the mantles of the countless statues of the Virgin in the churches of southern Spain, which, incidentally, address neither her status as the mother of Jesus nor her role as intercessor. Their function seems to be not unlike ornamental rhetoric.

The realistic images or central icons of the larger paintings are painted last, in traditional oil painting techniques, while in the smaller paintings, the more familiar images appear as altered ben-day dots, suggesting they have been borrowed from earlier printed copies of yet earlier originals, which have served other purposes. The text, when it appears in some of the paintings, imitates the medieval Batard script style.

Despite the fact that the paintings have no strict idea of a goal, and the detailed, literal
specificity of images may not have any assigned referent, every choice in the making of the paintings, such as structure, palette selection, script style, screen of altered ben-day dots, the ecclesiastic overtones of pomp and ceremony as surface glamour and the constant proclamation of artifice are intentional and measured to elicit response, to seduce and engage the viewer. This response is calculated to be ambiguous and conflicted, but is meant also to do justice to the final selection of the title: Scales of Spin.

I refer to it in order to explore such themes as: obsessive ambition, glamour as a mask for hidden agendas, or how anachronistic notions of identity may jeopardize such human traits as curiosity, imagination, carnal appetite and love through sexual expression- even rationality itself.

The degree of reference to Las Meninas varies. Sometimes, only the dog is appropriated (as tamed wolf or altered natural inclinations), or the Cross of Santiago (greed for higher social ranking).

The technical virtuosity of the 17th century in the arts parallels the new trust in rationality, a way of thinking recently divorced from myth and religion, but whose misuse, and subsequent illusion of superiority by the European elite, would cloud the future even to this day.