Tribes at The Phoenix Theatre 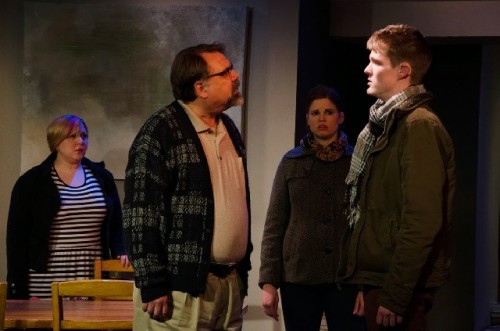 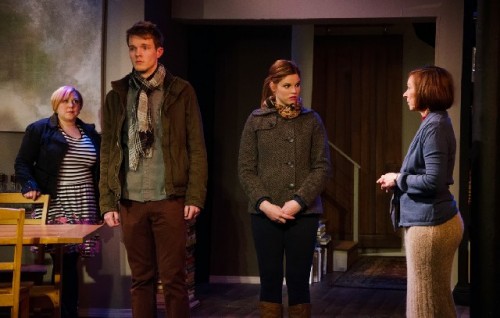 Exploring how we relate to each other. 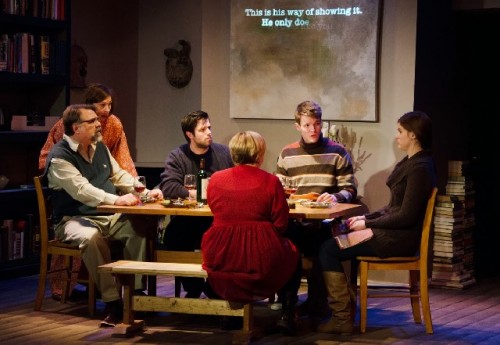 At the Phoenix through February 9/

A deaf man,Billy, is part of a large opinionated family. They are intellectual snobs ruled by a condescending patriarch, Christopher, and his empathetic wife Ruth. Their three adult children have all moved back home after frustrating turns in their lives. They bustle about the set, a crowded but cozy home filled to the brim with books and knickknacks, lost in their own problems.

Billy (Andrew Martin) has spent his whole life surrounded by the angst and chaos of his family. He's become used to a world in which he is a spectator but rarely a participant. Then he meets Sylvia, a lovely young woman on the verge of losing her hearing. He begins to question his role in the world and the way he interacts with others. Billy and Sylvia (Ryan O’Shea) have wonderful chemistry on stage. O’Shea is particularly good as a young woman trying to come to terms with a massive change in her world. She conveys the mixture of anger and frustration in such a sincere way and it's easy to feel her character's pain.

Stephen Hunt gives a powerful performance as the overwhelming father. He is constantly dismissive of his children, tempering every remark with a cruel cut. He antagonizes them and refuses to act civilly all under the guise of honest discussion. He loves to have others agree with him but bristles when anyone expresses a view or interest that differs from his own. He prides himself on his family's hyper-intelligent interactions, but with all his patronizing talk he's blind to his children's struggles.

The power of the play lies in the exploration of communication. In a world where people can hear they seldom actually listen. It's about communication in every sense of the word. The way we interact with family, our partners, and the rest of the world. It's about what we say and what we leave unsaid. As I heard another audience member say after the play ended, "Another great show at the Phoenix!"

For more information about the Phoenix Theatre. The theater is located at 749 N. Park Ave., Indianapolis, just off Massachusetts Ave.

Performances: The show runs until February 9 and offers four performances a week. Thursdays begin at 7 p.m., Friday and Saturdays begin at 8 p.m. and Sunday matinees at 2 p.m.