At Fondazione Hangar Bicocca in Milan 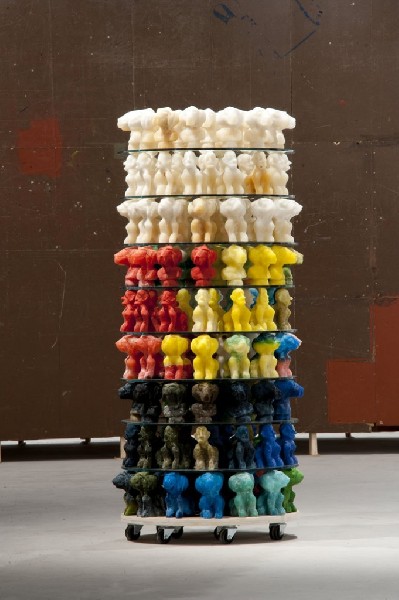 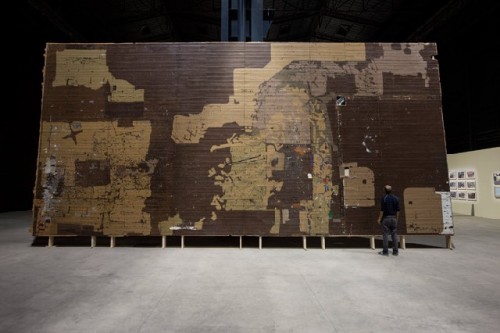 It will probably take you two, or maybe three, visits to get a real sense of Islands. To get the exhibition in its entire complexity, to try and catch each detail—whether it is visual, auditive, or olfactory. And still, it probably won’t be enough.

Entering Islands—the show dedicated to Dieter Roth (Hanover, 1930 – Basel, 1998) and his son Björn, currently on view at Hangar Bicocca in Milan, is one of the most significant experiences you might have to get a glimpse of someone else’s life—of an artist’s life, actually.

That’s partly because autobiography largely underlies Roth’s research, of course. But that also means that this groups of installations—sculptures, videos, paintings, graphics, photographs—really lead the viewer throughout an author’s daily activities, with no filter given by a theoretical superstructure. Which, obviously, exists as well. And yet, it is so well blended with the artistic production, that one can hardly distinguish art from life—in the most literal sense.

You can get an idea of this, starting from the first “island” you come across entering the huge space of the show, the Economy bar. This is a real and fully-functioning bar that Dieter’s son and grandsons have been realizing since 2004, making it a part of each exhibition. With its cozy atmosphere (a candle-lit counter full of stuff, soft blues and country background music) – the bar tries and cut out a warm corner inside the huge space of Hangar. When you finish to sip your beer sitting at its large tables – temporarily forgetting you’re inside an exhibition venue, your eyes will be caught by The relatively new structure—which comes as the result of an intergenerational collaboration, again.

This piece was especially made by the Hangar exhibition by Björn Roth with his sons, and it appears as a large walk-through installation where the viewer is invited to walk across a wooden scaffold – on which, together with old 1950s stuff, there are various broken musical instruments. Despite their decaying condition—and rather, thanks to that—they create a new sound when activated by an electronic device.

Nearby, The Solo Szenen (Solo scenes) is probably the most sensitive piece in the entire show: a visual diary of the last year of Dieter Roth’s life (between 1997 and 1998), this sculptural-video installation which we also saw at the last Venice Biennale, is made up with 131 monitors with daily scenes shot by the German artist. This huge reality show let us follow Roth’s everyday activities in his studios in Iceland and Switzerland, during his period of alcohol rehab.

The concept of an autobiographical diary is actually a recurrent theme in Dieter Roth’s practice—and each time it takes different shapes. It might be an accurate archive of little waste things (Flacher Abfall – Flat Waste), or simply the actual floor of his studio in Iceland (The Floor I, The Floor II). Removed from their original context and now installed as large dripping paintings, the floors look like some sort of an impressive ready made, needing nothing else but itself to tell a personal story over a period of about twenty years. But also in the 30,000 Rakyavik slides – screened simultaneously on 16 projectors placed on pedestals at the end of the exhibition path , some sort of a daily narration of the passing of time is staged. Each shot tells us about Roth’s deep relation with Iceland, where he spent large part of his life, in every season of the year.

Another fil rouge in Roth’s research is his interest in experimenting with food as common raw materials—which the artist let live and die under the visitor’s eyes. Walking through the Hangar’s space, you will come across the artists’ Self Towers, autoportraits made up with chocolate and colored sugar, and his Coquille Gnomes—with a bittersweet sense of life and death.

The experiences of the so called Mold Museum in Hamburg—comprising the New York kitchen, which has been reconstructed on the occasion of the Roths’ show at Hauser and Wirth gallery in New York, are here recollected, and return to the viewer Roth’s curiosity towards real life that, once again, totally blends with art.

Finally, the two-dimensional production by Dieter Roth also plays a key-role in the exhibition, with his huge series of graphics and paintings. The Piccadilly Project, above all—consisting of a series of 47 prints led by the idea of the serial reproduction of the same object with different colours and techniques—is a significant example of the artist’s interests in the concept of the multiple, and it also reveals his background as a graphic designer in his early years. The 55 shits for Rossana, THE DAMNED SHIT, and his mixed media paintings Material Pictures, are illustrative of this pratice, too—outlining the figure of an all-round artist that, with and throughout his son Björn’s work, reveals himself as a great director of life’s plot.