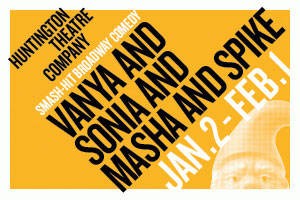 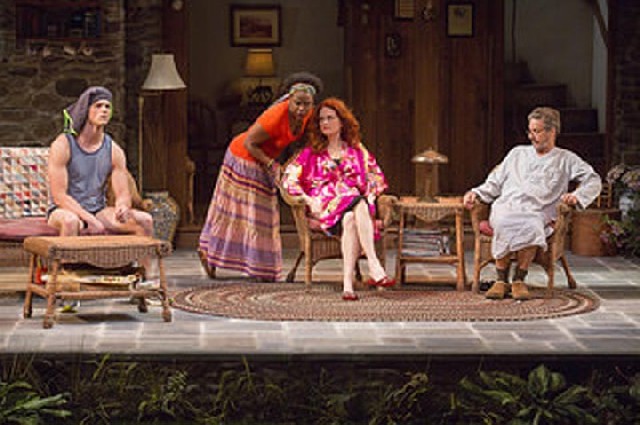 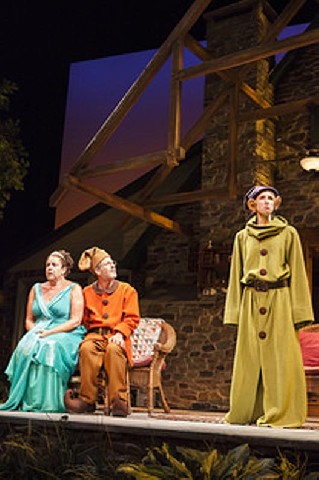 Marcia DeBonia, Martin Moran, and Allison Layman in Vanya and Sonia and Masha and Spike 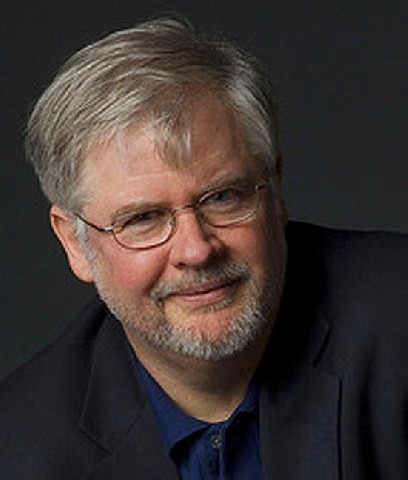 Theatre is about being entertaining. And that is absolutely what Christopher Durang's Tony Award-winning Vanya and Sonia and Masha and Spike is. Based on clever references both structural and dramatic to Anton Chekhov's Three Sisters, The Cherry Orchard, and Uncle Vanya, it is not a parody but a creative development of clever and laugh-out-loud character possibilities. These are made more real by  alluded to scenes, themes and sensibilities by the Russian master. This is brilliantly done while making the play both contemporary and yet understandably referential to Chekhov's three most performed works. And it all works and is funny.

Playwright Durang has set the story at the family home in Bucks County, PA. We first meet an odd couple -- a regretful Vanya (Martin Moran) and his adopted even more morose stepsister Sonia (Marcia DeBonis). Appearing more like a married couple than siblings, to their surprise they are soon joined by their overbearing actress sister Masha (Candy Buckley). Apparently, their parents loved Chekhov.

Bold and brassy, Buckley's Masha is an aging diva that takes charge. Appearing a bit unhinged, she is troubled by aging and the threat of younger women. Her insecurities are underscored by her opportunistic young boy toy Spike (Tyler Lansing Weaks). While Sonia and Vanya have been taking care of their recently departed elderly parents suffering from Alzhiemer's for the past 15 years, Masha has been traveling the world and acting without any elderly parent responsibility. But she has been paying the mortgage on the family house.

Unlike her brother and sister, she has had a life as well as 5 husbands. They had no real productive life. In their 50s, the siblings are quintessentially Chekhovian. All suffer from regret over unfulfilled lives. Vanya and Sonia are stuck in place by languor and depression. Masha is uneasy about her future and past. With dexterity, Durang's witty words and comedic rhythm make them very expressively funny. Family failure here is crafted comedic narrative.

Along the way, the cleaning lady shows up, Cassandra (Haneefah Wood). A soothsayer, she is an actual Cassandra who predicts a mostly bad, strangely worded future. Wonderfully magnetic, Wood steals the show every time she is on stage. With great stage presence, she is a poetic, humorous voodoo woman. Added to the group is the too good to be true neighbors' visiting niece Nina played most earnestly by Allison Layman. Nina is earnestly studying to be an actress.

Special notice should be made of Marcia DeBonis' Sonia. Her angst-ridden characterization makes you often want to just give her a hug. And Martin Moran's Vanya meltdown after his play is interrupted by Spike is a total treat of a tantrum.

Like most of The Huntington's stagecraft, the outdoor/indoor set by David Korins is visually wonderful. Lighting by David Weiner and original music and sound design by Mark Bennett punctuate the performances. Director Jessica Stone seems to have gotten everything just right.

Dysfunctional and at times desperate, Playwright Durang mixes all the characters together, and they shake out to a wonderfully amusing theatrical experience. Smiling incessantly may be a hazard of seeing this production. However, laughing aloud at times is mandatory.