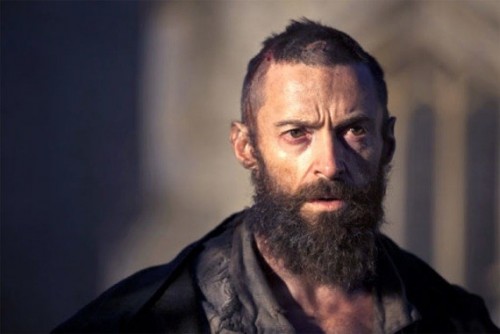 Type casting an Australian, Hugh Jackman, to play a convict. 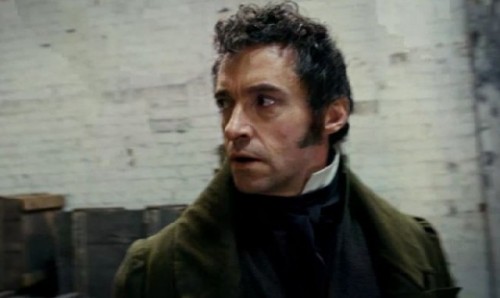 Valjean was rehabilitated as Mayor and chief employer of a village. 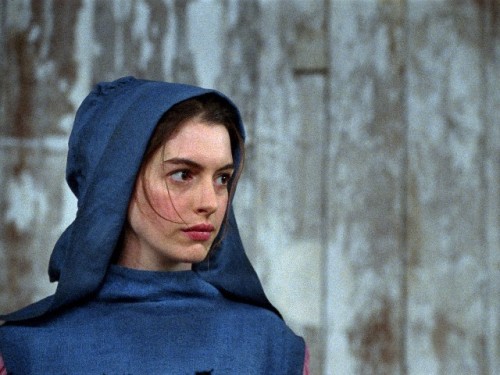 Ann Hathaway as a single mother struggling to support her daughter. 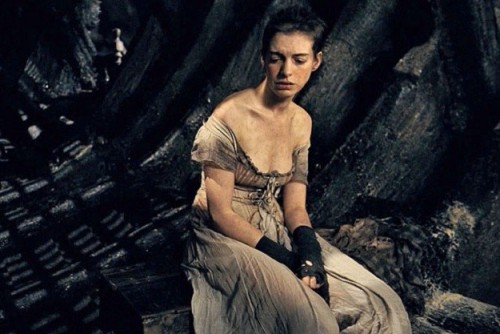 Destitute she turns tricks and sells her hair to support Cosette. 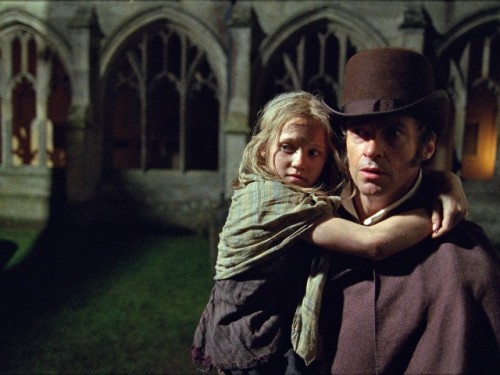 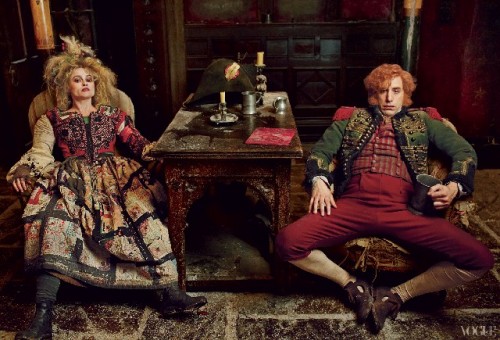 Cosette is bought and recused from the clutches of this happy couple. 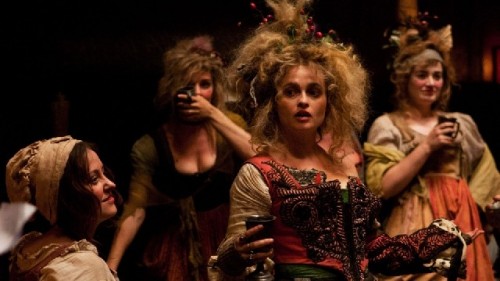 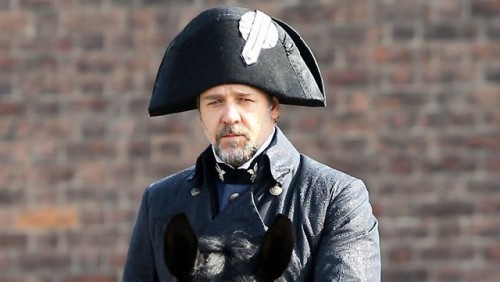 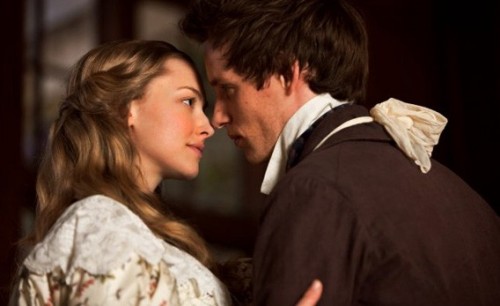 Screw the revolution Marius and Cosette live happily ever after. 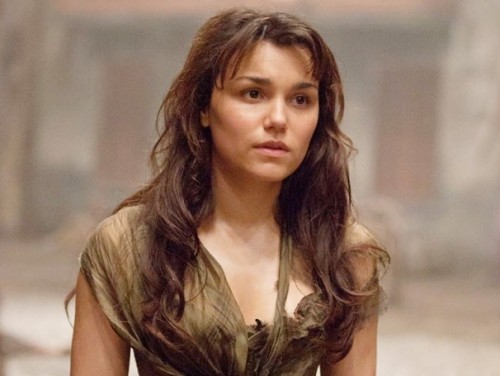 Compared to the rest of the cast Samantha Barks as Eponine could sign as well as act.

Can this be the same musical Les Misérables which I found so thrilling on the London stage in the late 1980s?

Compared to the amazingly tedious, two and a half hour film that droned on and on with anti-climax after anti-climax, for openers, the British cast could sing. Which helped to mask what is actually a weak score with occasionally compelling moments.

The most notable of which is Ann Hathaway’s three hanky turn with Fantine’s “I Dreamed a Dream.” Under the in your face, invasive, direction of Tom Hooper, she takes one for the team.

The tall, large eyed Hathaway has a gamin-like, awkward beauty which can at times be gawky. But here those fragile features are assaulted both by the men who pay to rape her and by the director who trashes her by rendering Fantine as a wasted, skeletal hag. The actress even submits to “selling” her hair to earn a few francs to send to her daughter Cosette. Hopefully, eventually it will grow out. Perhaps by Oscar time to tote home a statuette for which it would appear she is currently a front runner.

Much has been made of the fact that Hooper filmed the actors singing on camera. He zooms in for close ups that fill the screen. Problem is that it exacerbates the fact that the majority of the cast just can’t sing

This  musical is actually an operetta as there are few spoken lines. There are 49 musical numbers. This puts a lot of stress on actors who lack vocal training and, for the most part, can't carry a tune. The wretchedly worst example of this is the Australian, Russell Crowe, or is it Croak, as the villain Inspector Javert. This riveting character in the epic Victor Hugo novel relentlessly pursues Jean Valjean, played by fellow Aussie and Broadway veteran Hugh Jackman.

He has endured 19 years of hard labor for the crime of stealing a loaf of bread to feed a starving sister. As one critic commented, had he stolen a croissant, the sentence would be the guillotine.

Of course the metaphor of such monstrous punishment for a scrap of bread fits the agit-prop agenda of Hugo’s moralizing novel about the class struggle represented by one of many failed French revolutions. Like this miserable movie, Hugo’s novel is far too long and didactic for today’s ADD challenged average reader. Far more people know about Hugo’s novel than have actually read it. At the time of its publication, it was potent enough to have Hugo exiled from France.

The approach of Hooper is to switch off scenes between micro, those tight, probing, merciless head shots, and macro, panoramic views of Paris with zoom shots of the barricades manned by ardent students.

On stage, the barricade was stunning and rightly theatrical. In the film, it lacks illusion and is just kind of there. Those cast of thousands crane shots are oh so Cecil B. DeMille. Now digital in the 21st century, it seems that film craft has learned little or nothing.

This is a dark and gloomy film. The views of Paris and its dank interiors are grimy and grisaille. Nothing is light and pretty except, of course, the lovely Cosette (Amanda Seyfried), the adopted daughter of Valjean. He has been on the lam for decades and rehabilitated as mayor and primary employer of a small town.

It’s love at first sight between Cosette and a student radical, the son of an aristocrat, Marius, played as weak tea by the handsome but sniveling Eddie Redmayne. He phones in a performance, mostly looks lost, mizcast, and mizerable, and well, can’t sing a note.

Some dissident online sites are conducting contests to identify the worst singers in Les Miz. For me, Crowe tops the list, which is all the more damning since he is a key player. Though a fine actor, as a singer, he is incapable of bringing any emphasis to his croaking tunes. This is his most egregious performance of an otherwise distinguished career.

In this mizhap of a film, audiences seem to enjoy yet another, totally over the top role by the oh so British, Sacha Baron Cohen (Thénardier). He gets to toy with one of the few great songs in the musical “Master of the House.” No, he can’t sing, and has a cockney accent in a role as a French character. Yet again, however, we laugh too much to mind. We don’t see Helena Bonham Carter (Madame Thénardier) that often, but she is game as his accomplice/wife. Their characters play like outtakes from Sweeney Todd.

The Thénardiers were the guardians of the juvenile Cosette whom they are willing to part with when paid sufficiently by Valjean. They keep reappearing as blackmailers, even crashing the wedding of Marius and Cosette.

Having survived his stint as a revolutionary, his pals all died for the cause, Marius is now back in the ample arms of his father. He and Cosette will live happily and elegantly ever after. His youthful flirtation of slumming with the proletariat ends with a romantic embrace of the perks of aristocracy.

Of course, he was saved by Valjean in that famous slog through the sewers of Paris chased by Javert. Here Hooper goes all out literally covering Jackman in shit. It made me want to laugh at the absurdity. Hopefully Jackman took a long hot shower after that scene.

In addition to casting actors not singers for the musical Hooper utterly ignores that it is set in 19th century France. There doesn't appear to be a single French actor or hint of an authentic accent in the entire overblown, pretentious production. For all the cash lavished on the film they might have taken a stab at hiring a dialogue coach.

There is such a British/ Australian slant on the film that is evokes Charles Dickens more than Victor Hugo. Hooper entirely mizzes the point.

This week the Oscar nominations are due. We will wait and see if this Golden Turkey can fool some of the people some of the time. In the early running Hathaway is a lock. Probably Jackman as well but I’m not sold. There’s some buzz for Samantha Barks (Éponine) who at least can sing as well as act. In this production, that’s a rare asset.

There should be pro forma nominations for Best Picture, Best Director, Best Design and all the rest that goes with a big, ambitious, overdone production of a theatrical classic.

Come Oscar Night, however, let’s hope that you can’t fool all of the people all of time. Last year with The Artist silence was golden. This year it could be bombast that prevails.